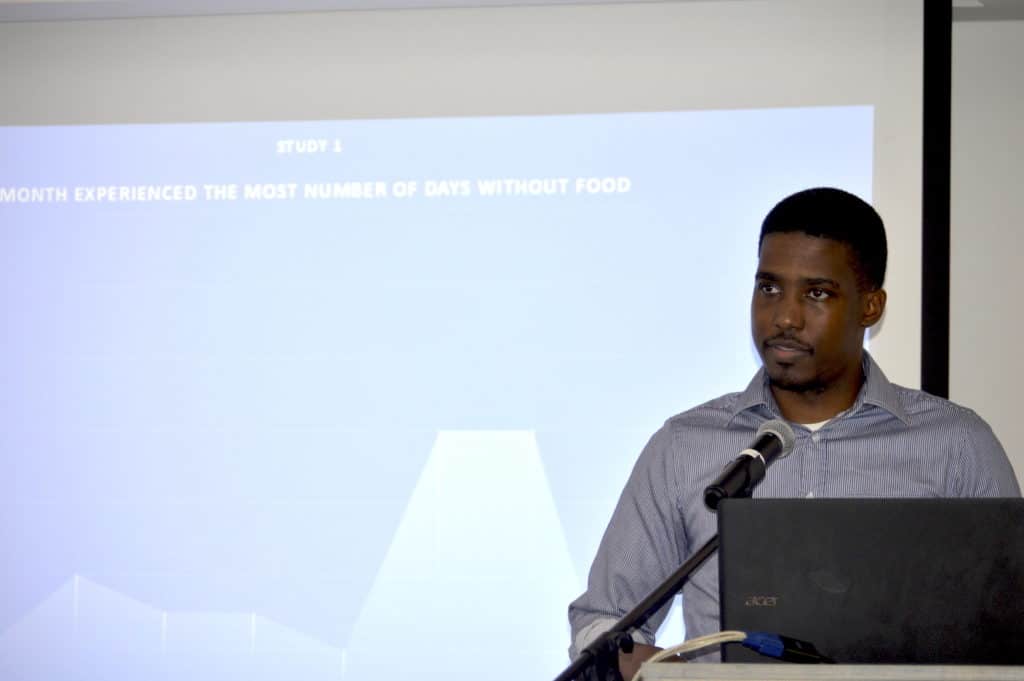 Remoneilwe Mogatosi: Current measures tell us that South Africa is food secure, yet household food insecurity is a lived reality of many

The problem of food insecurity in South African universities is a reality – but is not well documented. There is a big need for research on the issue to be documented and made available – and for streamlining in terms of methodology.

This was the view put forward by the University of Free State’s Dr Lucia Meko on the final day of the National Colloquium on Access to Food for Students in South African Tertiary Institutions, organised by the Socio-Economic Rights Project at the Dullah Omar Institute, University of the Western Cape, in collaboration with the DST-NRF Centre of Excellence in Food Security (CoE).

Speaking at the during a session chaired by CoE director, Professor Julian May, Dr Meko said a streamlined methodology in research about student food insecurity in South Africa would help researchers to “speak from the same mind and thought space.”

“Food insecurity affects different students based on their demographics. We found more African students and more males were food insecure and were depending on student aid, loans and bursaries. Previous research conducted on the same campus in 2013 found that 56 percent of the students surveyed were food insecure.”

Turning to the interventions aimed at alleviating hunger and food insecurity, Dr Meko said such measures need to take into consideration the nutritional needs of students.

Whatever the interventions are, they have to ensure that the food provided meets the recommended standards in terms of variety and quality

Remoneilwe Mogatosi, a Masters student based at the University of the Western Cape, said during the same session that, in determining the research focus, “we should try to come up with new ways of thinking about food security and insecurity.

“Our current measures tell us that South Africa is food secure, yet household food insecurity is a lived reality of many. We have a disaggregated way of studying food security. We should realise that there are pockets in society which are more food insecure and this has to do with access and inequality.”

He explained: “Study 1 showed a high prevalence of food insecurity. Most of the students on NSFAS reported that despite having financial aid, this aid often came late in the year. This left students vulnerable to food insecurity at the beginning of the year and once more in the beginning of the second semester. The qualitative phase of the study also showed that students had a subjective interpretation of what it meant to be food insecure. Despite most of the students being food insecure, participants insisted that they were not. Students often referred to other people in poverty as a point of reference. Further inquiry revealed that students who went the most number of days without food were less likely to accept aid in the form of food vouchers.

First-year students relied on several coping strategies including borrowing money from friends. During focus group discussions, females reported forming groups to contribute towards monthly groceries. This method allowed relief every third month for each of the girls. Males reported low cooking skills and hardly cooked together. The first-year university residence did not have designated cooking areas for students to cook. This meant that students have to buy food storage and stoves. For females, this was relatively easier as two or more women shared one fridge while males did not adopt this practice. When it came to issues of stigma, males reported that they would not go for food aid while females reported having no issue with getting food aid.”

Mogatosi said South Africa was suffering from a misalignment of the intentions of policy.

“Even the things put in place to help those students are actually failing them, for example NSFAS. It ends up being a form of structural violence. We are making universities into harmscapesas we are bringing poor students into tertiary institutions that are simply not ready to provide adequate support for them,” he said.

Mogatosi said it was important to highlight the challenges of food security and to get more people, not just government, but the private sector involved in alleviating food insecurity.

Speaking during the same session, UWC’s Professor Rina Swart said some of the confusions around the discrepancies of food insecurity result from different definitions of food security. Swart is also Principal Investigator of the Shelves, Baskets and Plates Programmeat the Centre of Excellence in Food Security.

She said a 2017 survey showed that some students (about three percent surveyed) had been forced to make use of sex to pay for food. On the positive side, it was refreshing to see how widespread the willingness was to share with fellow students at UWC.

“There is a great sensitivity about hunger … some suggested that most students are in the same boat and should not feel stigmatised by the problem.”

One thing was certain, Professor Swart said, “the students are more hungry when NSFAS doesn’t work.”

SARChI in Social Protection for Food Security listed among world’s most impactful...

2020 Newton Prize Finalist, Professor Stephen Devereux, made the cut on the list of the world’s most impactful researchers. This…