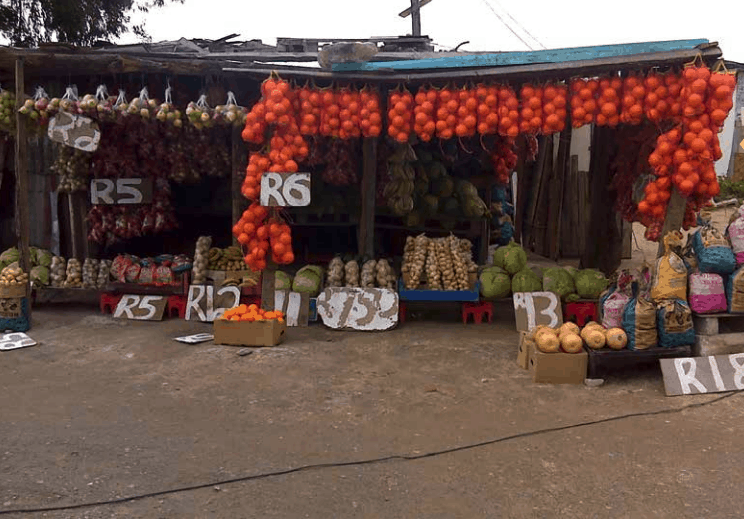 Thobile Gavu’s story has been played out across the country. A street vendor in Durban, her business, which depends on a regular supply of customers, became even more precarious when the government announced a nation-wide lockdown at the end of March in an effort to contain the Coronavirus outbreak.

Trading in fruit and vegetables at a normally busy transport interchange, the 44-year-old mother of two found that overnight foot traffic had slowed down to a trickle. In no time her income had dropped sharply. “We are really affected by this lockdown because the kids want food,” Gavu told an ENCA reporter in a 5 April broadcast. “When we were told to stay at home it was month-end when we usually make money,” she said.

But even in the face of her growing hardships, Gavu could be counted among the more fortunate. Many vendors suffered the loss of precious stock as police confiscated their merchandise following initial regulations barring informal food trading.

Despite the good and warranted public-health intentions of the lockdown, it soon became clear that the measure was putting the livelihoods of millions at risk. Including those of street vendors like Gavu, as well as spaza shops, bakkie traders and hawkers, among others.

And the informal food economy is no small change.

By some estimates, it is worth around R360 billion a year, accounting for anything between 30-50% of the country’s food and grocery sector.

What’s more, it is believed to employ, directly or indirectly, some three million people, more than the number employed in the formal food trade.

“The informal food economy is a substantial part of the food supply and food distribution in the country,” explained Dr Marc Wegerif of the University of Pretoria and the C19 People Coalition at a meeting of the Food Governance Community of Practice (CoP) on 28 April. Associated with the national Centre of Excellence in Food Security (CoE-FS) – jointly hosted by the Universities of the Western Cape and Pretoria –  the CoP is a gathering of academics, food activists, informal-sector representatives, civil society, and government officials who discuss ways to, at a very practical level, address issues around food insecurity at a provincial level.

Drawing over 70 participants from across the country, the group’s Zoom meeting on 28 April was dedicated to the impact of COVID-19 on the informal food trade in South Africa.

Listen: How Covid-19 has impacted the informal economy in South Africa

As Wegerif went on to explain, the informal food sector plays a key role in the lives of millions more; some 70% of people in poor neighbourhoods buy from informal food traders. These traders are easily accessible to their communities, sell goods in flexible quantities, are considerably cheaper in the case of fresh produce, and even offer credit to consumers in a pinch.

The lockdown has presented informal traders with a barrage of red tape, pointed out Ms Caroline Skinner of the African Centre for Cities at the University of Cape Town. Even once the initial sweeping ban on informal trading was lifted, vendors still had to apply for permits from their municipalities, previously not required. For foreign nationals, this was particularly difficult as they required a visa that allows them to do business, or a valid asylum seeker’s permit, which many do not have. “So we strongly argue that while databases are important, this is not the time to be formalising the informal economy – there is just too much at stake around the food security issue,” said Skinner.

Over the CoP meeting, several other concerns were raised. Ms Rosheda Muller of the South African Informal Traders Alliance spoke of the need for support for informal traders, much like the aid being offered the formal business sector. Officer Xolani Fihla, spokesperson for the Johannesburg Metro Police Department, and Paul Williamson, service coordinator with the City of Cape Town, explained the difficulties experienced in enforcing lockdown regulations and the issuing of permits to informal traders.

By casting a harsh spotlight on the socio-economics of South Africa, COVID-19 may just have opened a window of opportunity for change, suggested Associate Professor Vishwas Satgar of Wits University. “It’s clear that we are in a moment where we can push South Africa towards a transformative solution around this particular challenge of inequality and precariousness in our society,” said Satgar.

The CoP is now weighing up ways in which it can make a substantial contribution to the issues of food security, especially amid the national lockdown. And as one participant reminded the meeting, there should be a sense of urgency to it as lives and livelihoods are at risk every day.

Our response to the 2022 State of the Nation Address

In response to the State of the Nation Address, delivered on Thursday 10 February 2022, the DSI-NRF Centre of Excellence…