How do powerful players in formal and informal food economy shape food security, nutrition and livelihoods? 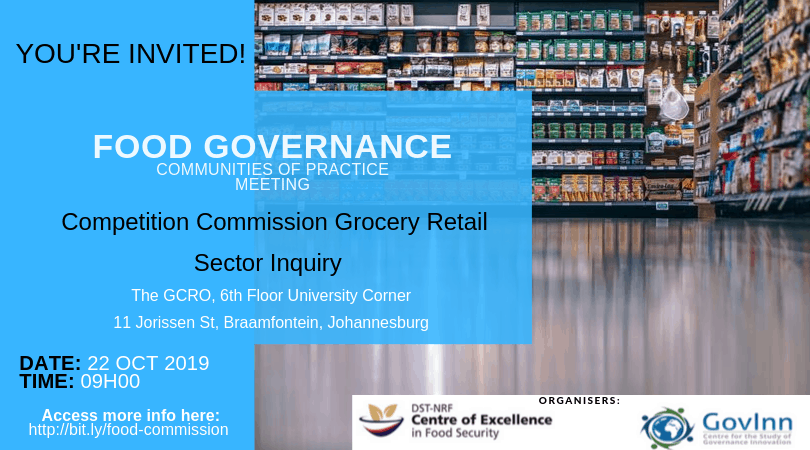 The South African Food System is highly concentrated, and food retail dominated by a handful of powerful corporations closely aligned with the interests of property developers and global capital. The informal sector is undergoing rapid change with the entrance of new competitive transnational networks and business models. These powerful players in formal and informal food economy are able to unfold disproportionate influence and market power, effectively shaping the playing field in their favour.

But to what extent is this impacting on food security, nutrition, and livelihoods in the food economy?

Noting features of the food retail economy that may prevent, distort or restrict competition, the South African Competition Commission undertook a grocery retail inquiry. The inquiry sought to understand how the grocery retail sector in South Africa operates, particularly the impacts on small and independent retailers and the informal economy of:

The Draft Grocery Retail Inquiry Report, released in May 2019, found a combination of features “that may prevent, distort or restrict competition. In particular, there are three principal areas of concern that warrant remedial action, namely long term exclusive lease agreements and buyer power; competitiveness of small and independent retailers; and the regulatory landscape.” Market distortions restrict consumer choice and present significant barriers to economic participation by small and independent retailers. The report makes various recommendations relevant to local and provincial government to better regulate the grocery retail sector.

But what does this mean for local and provincial government and other stakeholders? What is the local state’s mandate to engage with the issues? What strategies and mechanisms are available for local government to implement these recommendations?

Join us at the Gauteng FoodGov Community of Practice gathering on 22 October at the GCRO to engage with Dr Yongama Njisane, Principal Economist of the Competition Commission, as he reflects on the findings and their implications for local food governance.

Seating is limited, email: florian@plaas.org.za to reserve your seat.
October is transport month at the GCRO, so in the second session, we will be discussing the role of transport in food systems, exploring the role of transit nodes as food environments, and considering the implications for food governance, especially in light of the competition commission grocery retail inquiry findings.

WEBINAR: Epidemic shocks and food cultures in the new millennium

We recognise that producers, processors, distributors and consumers are incorporated into the food system under varying terms and returns. We also recognise the economic, social, human and environmental health impacts associated with food security. Therefore our goal is to conduct research, build capacity and disseminate findings that will promote a sustainable food system in South Africa.

Our research is concerned with the scale, nature, causes and consequences of food insecurity in South Africa and elsewhere on the African continent. Thus our mission is to investigate products, technologies, processes and policies that can reduce food insecurity and mitigate its negative outcomes. We seek to make a difference to food security by linking innovative science with critical enquiry.