In a new paper, a Centre of Excellence-associated researcher explores the rocky road ahead for agroecology in South African cities. 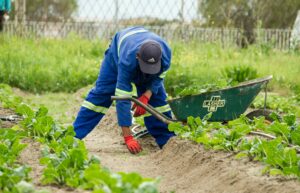 The name itself – agroecology – may be relatively new, but the associated philosophy of a sustainable farming practice that reimagines the relationship between humans and the environment has been around for a while. But agroecology has become far more than a green farming philosophy: it is also a social movement that demands more democratic, participatory ways to govern food systems, and approaches to research that validates and embraces local knowledge systems.

In a 1990 paper, one scholar asks if the then‑emerging notion of “sustainable agriculture” is a harbinger of things to come or a mere fad? That paper also explains that those in favour of such a more sustainable farming model had long been at odds with the agricultural establishment, the former being “contemptuous of the promoters of modern industrial agriculture [the latter], because of the environmental and social disruptions they attributed to it”.

The dust has yet to settle on that argument, as argued in a new paper, Agroecology and the Metropolitan Biopolitics of Food in Cape Town and Johannesburg, by Florian Kroll, a food systems researcher and PhD candidate with the Institute for Poverty, Land and Agrarian Studies (at the University of the Western Cape (UWC), who is also associated with the DSI-NRF Centre of Excellence in Food Security (CoE-FS).

While agroecology research tends to emphasise rural and agricultural perspectives, Kroll contends that the big metros could play a key role in facilitating transitions to agroecology due to the powerful aggregate demand for food generated by large urban populations. What’s more, he points out, many of the core industries shaping rural food systems — processors, packaging, distribution, retail, and waste management — are clustered in cities and, therefore, regulated by metropolitan authorities.

Yes, the principles of agroecology (by that and other names) have become more mainstream. But the concept itself is also under threat of being co‑opted and watered down under the guise of ‘sustainable intensification’ to enable ‘business as usual’ to continue — with a few green tweaks, perhaps. However, insists Kroll, there is general consensus that the industrial food system has spawned a host of “environmental, societal, and health crises”.

Agroecology faces an uphill struggle in South Africa because of an ambiguous food governance environment, argues Kroll. If “impulses toward systemic food governance have emerged in the South African cities of Johannesburg and Cape Town”, it is unclear if the transition is facilitated by government processes.

“While it appears that the state has means and is developing strategic intent to support agroecological transitions, current configurations of state rationalities and instruments of power reflect primarily neoliberal and reformist transition pathways, perhaps with a few progressive elements,” he observes.

What’s required is the will to transform metropolitan food systems, which means tackling the internal structures and mentalities that obstruct the process, says Kroll. But more than that, it demands a strong social movement that will light a fire under the political powers.

Photo: Loren King/Unsplash. For all its ecological and social credentials, agroecology as an agricultural practice faces an uphill struggle in…

Accusations of price gouging a common feature of COVID-19

In June this year, in what was the first contested case of excessive pricing related to the COVID-19 pandemic in…