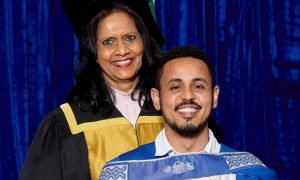 Farming is in the blood of Dr Ali Elnaeim Elbasheir Ali. As a young boy growing up in Sudan, he fondly remembers how his eldest brother farmed sorghum, while his father used cuttings from a naartjie and grapefruit tree to grow a hybrid tree that sprouted both fruits.

In September 2022, the boy who grew his own watermelons from a young age, graduated with a PhD from the University of the Western Cape (UWC). Through his doctoral research, Dr Ali successfully identified modern ways to influence the tolerance of sorghum to drought and heat stress. His results are of great significance as they may improve food security on the African continent where many countries are dependent on maize, sorghum, and other grains.

“My findings identify new key proteins and molecular pathways that determine tolerance to combined drought and heat stress in sorghum and will facilitate the genetic improvement of crops for resilience to these two stressors, which in turn will improve food security under climate change,” explains Ali.

While maize is considered a summer crop and is the most consumed staple on the African continent, it is sensitive to drought and high temperatures. Sorghum, however, is hardy, drought-tolerant, requires less water than maize to grow, and has great health benefits.

When Ali was not in the lab or field, he grew vegetables outside his residence to share with others on campus.

“I always liked farming when I lived in Sudan. When I moved into Dos Santos residence at UWC, I started a small garden where I grew spinach, onions, cabbages, green beans, corn, mint and tomatoes. It was an open garden where people could pick what they needed.”

He also established a garden with his colleague Gerhard Basson at Athlone School for the Blind in Bellville South.

Ali, with his supervisor Professor Ndiko Ludidi, a principal investigator with the DSI-NRF Centre of Excellence in Food Security (CoE-FS), are currently engaging with small-scale farmers in the Eastern Cape, KwaZulu-Natal, and Northern Cape, using their knowledge in agricultural biotechnology to assist farmers in improving their agricultural practices and sustain yield.

One of the things Ali says that “severely affects” South Africa’s small farmers is drought “because they lack access to modern agricultural technologies”.

Information shared by the United Nations indicates that the four years preceding 2019 were the hottest years on record, with “glaciers and ice sheets in polar and mountain regions melting faster than ever, causing sea levels to rise”. Because of this increase in temperatures, crops that grew fairly easily in certain areas are now struggling to survive.

“With climate change, we are expecting temperatures to rise across the world, which means that we’ll have to find ways to improve the ability of crops, especially on the African continent, to grow in intense heat and severe drought. We will have less water for agriculture, so we need crops that use water efficiently, and can tolerate, survive and be productive under these circumstances to ensure we can continue to feed the world’s growing population,” says Ali.

“I also got As for all the modules that I took while I was there, and learnt a lot about molecular biology techniques that are fundamental to my research.”

After his return from Italy in March 2020, South Africa went into a hard lockdown to prevent the spread of COVID-19. At the time, Ali had not yet started his laboratory work for his PhD thesis. Many universities temporarily suspended field research, but Ali eventually got permission to start his field experiments, which involved growing crops at the research site of UWC’s Plant Stress Group in the Eastern Cape.

In November 2021, Ali went to the University of Missouri in the United States for just over a month to work on his research and analyse his findings. This visit allowed him to improve his research and broadened his understanding of his research field. Ali’s co-supervisor, Professor Robert Sharp, is a Distinguished Professor in Plant Science and Technology at the Columbia-based university. Ali says he is grateful to both Professor Sharp and Ludidi who he describes as “wonderful supervisors” who “were always encouraging” him.

“I am also grateful to the CoE-FS, because had I not received funding from the centre for my master’s and PhD degrees, I would not have gotten to this point.”

Ali is currently engaged in postdoctoral research with the CoE-FS, under the guidance of Ludidi, and is involved in other research projects in the department. He is also turning his research into journal articles, supervising postgraduate students, and lecturing.

Ali’s advice to anyone who wants to enrol for a PhD degree is to manage their time well.

“Do not leave anything for tomorrow that can be done today. Go for all the opportunities that you get to learn – exchange programmes, conferences, workshops, and short courses. It is not just about getting a degree, but about what more you can learn and the skills and experience that you gain. No one is going to hire you just because you have a PhD.”

Photo Gabriel Jimenez/Unsplash. The special issue of Sustainability, which will build the empirical evidence base on agroecological transitions in middle-…