CoE-FS unpacks food security on the continent in Africa Month

Researchers within the DSI-NRF Centre of Excellence in Food Security (CoE-FS) discussed the importance of breastfeeding and its connection to food security in Africa at a recent virtual Science for Society lecture co-hosted by the centre. 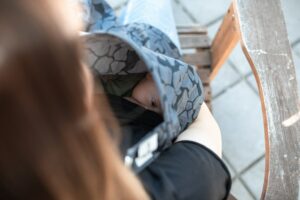 In recognition of Africa Month, the DSI-NRF Centre of Excellence in Food Security (CoE-FS) at the University of the Western Cape (UWC) co-hosted a virtual Science for Society lecture with the National Research Foundation (NRF). The lecture focused on the African Union (AU) theme for 2022, “Strengthening Resilience in Nutrition and Food Security on the African Continent: Strengthening Agro-Food Systems, Health and Social Protection Systems for the Acceleration of Human, Social and Economic Capital Development”.

The CoE-FS is hosted by UWC and co-hosted by the University of Pretoria (UP) and focuses on “innovative research and critical enquiry to enable South Africa to tackle the challenges of food security and nutrition”. It is also the first DSI-NRF CoE to be hosted at a historically black university.

“We know that child growth and development is a proxy indicator of how well a community or a country is doing. Child stunting across Africa is, however, not decreasing enough to meet the United Nations’ Sustainable Development Goals’ targets and has been further exacerbated by the negative impact of COVID-19, the economic downturn, and the ongoing conflicts and wars in Africa as well as the current war in Ukraine,” explained Dr Chantell Witten, a previous awardee of the CoE-FS and lead on the Infant and Young Child Feed advocacy project at the centre.

“This is having a negative impact on food security in Africa with global food insecurity increasing and Africa experiencing multiple and intersecting threats that are aggravating the situation, especially malnutrition in children.”

Dr Witten was one of the speakers who participated in the event along with Professor Lise Korsten, the co-director of the CoE-FS and professor in Plant Pathology at UP; Dr Nazeeia Sayed, a former CoE-FS awardee and current postdoctoral researcher at the School for Public Health at UWC; and Sithembile Mwamakamba, the Director: Policy Research and Analysis at the Food, Agriculture and Natural Resources Policy Analysis Network (FANRPAN). The discussion was facilitated by Naledia Moleo, an SABC news anchor.

Researchers have long understood the negative impact of poor nutrition on the physical and educational development of children; however, more recent studies also suggest that there is a direct correlation between malnutrition and the economic development of a country. This theory is supported by findings from the 2019 Continental Accountability Scorecard produced by the African Leaders for Nutrition Initiative (ALN), which falls under the AU’s African Development Bank.

According to the scorecard:

At the same time, the continent is dealing with obese and overweight populations due to poor diets that also lead to higher incidences of morbidity and deaths.

Witten’s presentation delved into infant and young child feeding, the breastfeeding landscape in Africa, threats to mothers’ infant feeding decisions, and the opportunities available to protect breastfeeding mothers and their children.

Across the globe, child growth is measured against a standard growth curve and in South Africa, this growth is recorded in a child’s “Road to Health” booklet, which also highlights the components that make up a nurturing care framework. Good nutrition forms part of this framework and is “the foundation for health and starts with breastfeeding”.

Referring to research conducted by the Building Better Brains programme in 2013, Witten explained how this study revealed that “adequate nutrition and consistent, supportive adult caregiving are the best ways to offset the effects of multiple adversities and to support healthy brain development”.

This has also been demonstrated through scientific research conducted in the early 1990s, where autopsies conducted on children who were stunted and those who were healthy, indicated that stunted children’s brains were “stunted both in physical size, but also in the neuron pathways”.

However, even with all the scientific evidence, breastfeeding in Africa is not at an optimal level according to the World Health Organization’s (WHO) targets.

“If at the current trends, that were measured in 2000 and 2017, and if the current trends were trajected and extrapolated to 2025 through modelling, it shows that breastfeeding will no longer be a norm on the African continent. This has huge impacts for both maternal and child health. The reason for this is because breastfeeding is directly in opposition to infant formula and the breastfeeding mother stands no chance against a global multinational, multibillion-dollar industry,” explained Witten.

Earlier this year, the WHO called on the baby food industry to end exploitative formula milk marketing as well as governments to enact laws to protect children and families by “monitoring and enforcing laws to end all advertising or promotion of formula milk products”. Fortunately, in South Africa, mothers have been afforded protections by the law since 2012. In addition, there have been many advertising campaigns to reposition breastfeeding as a positive. However, says Witten, this is unfortunately not enough.

“In this context of a decreasing breastfeeding environment, it will take a number of initiatives to support the breastfeeding landscape by investing in evidence-based, context-specific counter-interventions to constrain the influence of the infant formula industry, to apply diligence in the policy environment and create programmes to promote and support breastfeeding. That has, however, resulted in low returns. Food and nutrition professionals need to take on leadership roles wherever they are to position breastfeeding as central to health and development and, individually and collectively, we need to raise the breastfeeding agenda in all our settings.”

According to Dr Sayed, “breastfeeding is a fundamental and critical action to ensure the food and nutrition security of infants”.

“Recent global events have really highlighted to all of us the interconnected nature as well as the fragility of our food systems,” said Dr Sayed, whose doctoral research focused on infant complementary feeding.

“I believe that this is happening in all parts of society and that, as individuals who are part of the food system, we can all impact and improve the nutrition and food situation through small actions that we take every day. So, whether this is choosing what food to buy, where to buy our food, raising concerns with your councillors about food that is available or not available in your community or raising concerns with your food retailer, starting a conversation with your employers about workplace support for breastfeeding, or supporting a breastfeeding friend or family member, we all have a role to play.”

Sayed, who is a registered dietitian, is currently working on research regarding food environments and the drivers of food choices. She has also conducted research on food composition and has worked in communities to teach individuals about nutrition.

“The decision to breastfeed is a complex one. As a new mother, you are influenced by what you see out there, what other moms are doing, what is happening in the media, what is happening at the clinic and hospital and what other people tell you. For a long time in South Africa, formula feeding was positioned as a more status-based behaviour that modern, educated moms did, while breastfeeding was positioned as something you had to do if you could not afford formula,” explained Sayed.

“When it comes to food safety, breastfeeding is safe. It does not require water, electricity, or the right temperature and if you think about the impact on the environment, breastfeeding does not need a factory to manufacture [milk] and it also does not result in waste products such as packaging. In a food system view, breastfeeding is the ideal product.”

“Even with all the information made available to mothers and the support given to mothers to establish good breastfeeding before they leave the clinic or hospital, it cannot be done without having a society where mothers feel enabled to breastfeed when they are at a restaurant, need to pump breastmilk at work or leave a meeting to do so. We need to normalise breastfeeding.”

The full lecture can be viewed here: https://bit.ly/3aKnkQc.