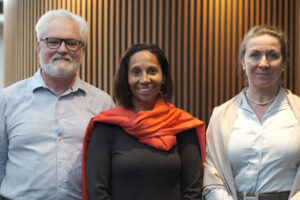 A group of academics from the DSI-NRF Centre of Excellence for Food Security (CoE-FS) and the University of the Western Cape (UWC) has stepped up to address the “insidious and aggressive” marketing tactics of the formula industry as reported in a recent World Health Organization (WHO) report. Their research, which will be housed under the Infant and Young Child Feeding Advocacy (IYCF) project within the CoE-FS, will address how misinformation and misrepresentation of infant formula undermine mothers’ feeding decisions.

The news comes just as World Breastfeeding Week (WBW), which is celebrated by countries across the world, commences on 1 August. The WBW campaign was started in 1992 by the World Alliance for Breastfeeding and “aims to inform, anchor, engage and galvanise action on breastfeeding and related issues”.

The IYCF, a Family Larsson-Rosenquist Foundation-funded project, will focus on creating “an environment, where women’s breastfeeding choices are not unduly influenced by the marketing of formula,” says Dr Chantell Witten, the project lead of the IYCF.

Dr Witten is supported in the project by Dr Nazeeia Sayed, who is the project liaison, with institutional oversight from the director of the CoE-FS, Professor Julian May. The IYCF is also governed by a steering committee, with representatives from UWC, the project funder, and the WHO. The project is supported by a technical working group consisting of the South African Medical Research Council; the Division of Community Paediatrics and the School of Public Health at the University of the Witwatersrand; the Children’s Institute at the University of Cape Town; the Grow Great Campaign and HEALA.

The project, says Witten, falls within the field of operational research and will involve engagements with multiple sectors to develop and determine the costs of a strategy to counteract the formula marketing in South Africa.

“If South Africa — a country with the lowest breastfeeding rates in Africa — is to meet the United Nations’ nutrition target of 50% exclusive breastfeeding by 2025, accelerated efforts are needed, and dedicated investments from multiple sources will be needed. Perhaps even a tax such as the sugar tax will be warranted,” says Witten.

In South Africa, even with a legal instrument like the 2012 Regulations Relating to Foodstuffs for Infants and Young Children (R991), which prohibits “advertising and promotion in any form, and on all media platforms”, infant formula companies are finding ways to reach mothers when they are at their most vulnerable. Most notably, as reported by another UWC/CoE-FS-funded researcher in the School of Public Health, Catherine Pereira-Kotze, through social media and digital platforms.

“The formula industry has eroded women’s confidence in their ability to breastfeed, not only through its aggressive social media marketing strategies but with the support of medical and health care professionals as well as academics who are targeted and influenced by the formula industry,” adds Witten.

Women are also targeted through marketing on pregnancy tracking apps, baby clubs and through competition giveaways used to promote formula feeding information to mothers. These actions by the infant formula industry have led to the “premature cessation of breastfeeding” becoming the norm in South Africa in spite of “the global evidence for the benefits of breastfeeding”.

“In 2016, the national demographic and health survey indicated that we were only at 32%; if you look at the trajectory of breastfeeding based on the current evidence, we will not make the 2025 target of 50%. This is because we have not had accelerated efforts nor are we counteracting the negative impact the aggressive marketing of formula is having on mothers’ feeding decisions,” says Witten, who is also a member of the National Department of Health Ministerial Committee on the Morbidity and Mortality in Children under 5 years (CoMMiC).

According to Witten, the “culture and normative in South Africa is mixed feeding with formula”. The country has also failed to build a pro-breastfeeding culture and environment with a comprehensive package for maternity protection.

“While women who are employed can claim maternity leave, unemployed mothers do not have access to such government-funded packages in order to practice optimal childcare. Many unemployed mothers have to go out and look for work every day, so their only option really is to formula feed. The ethical dilemma that the country faces is that when you are poor you can’t afford formula, and, therefore, you end up feeding your child very poorly, which leads to the high stunting and obesity rates we are seeing in South Africa,” adds Witten.

Whether mothers are forced to stop breastfeeding due to circumstances or choose to formula feed for convenience, the impact on their children’s health remains the same.

“We need a child-centred food system that puts child health ahead of profits, with ethically sound marketing and targeting by the infant formula industry, especially in contexts where the majority of households are not able to afford adequate amounts of formula to optimally feed their infants.”

“Children who are fed formula suffer many health challenges such as obesity, allergies, poor growth and compromised cognitive development. Right now, the infant formula companies are skirting on ‘fake news’. The long-held belief that infant formula claims to be close to mother’s milk is not true.”

The concerns raised by Witten are not only shared in the findings of the WHO’s current report, but also in the February 2022 report on How marketing of formula influences our decisions on infant feeding.

“Now that we have the evidence of the underhanded marketing tactics of the infant formula industry, we are obligated to protect women and the health of their children.”

Approximately 8 500 parents and pregnant women, and 300 health care workers from across several countries such as Bangladesh, Mexico, Morocco, the UK, and South Africa participated in the research. It indicates that the US$55 billion baby formula industry has continued to perpetuate the idea that breastmilk is inadequate for “infant nutrition, that specific formula ingredients are proven to improve child development and immunity, and that formula keeps infants fuller for longer”.

The IYCF project is aligned with and in support of the strategic initiative of WHO to work with countries, including South Africa, to strengthen legislation with respect to implementing the International Code of Marketing of Breast-milk Substitutes, as well as monitoring and enforcing the R991.

For more information about the project, Dr Chantell Witten can be contacted at cbwitten@uwc.ac.za, Dr Nazeeia Sayed at nasayed@uwc.ac.za and Professor Julian May at jmay@uwc.ac.za.