The lives of Charnell Jantjies and Rozeanne Booysen was changed almost immediately after telling their heartbreaking stories at the National Conference on the Future of Farm Workers in South Africa, thanks to a determined community activist.

If conferences have a reputation for being no more than longwinded talk shops, day three of the National Conference on the Future of Farm Workers in South Africa – at the University of the Western Cape (UWC) from 16-18 October 2019 – showed that they can also lead to real and life-changing action. 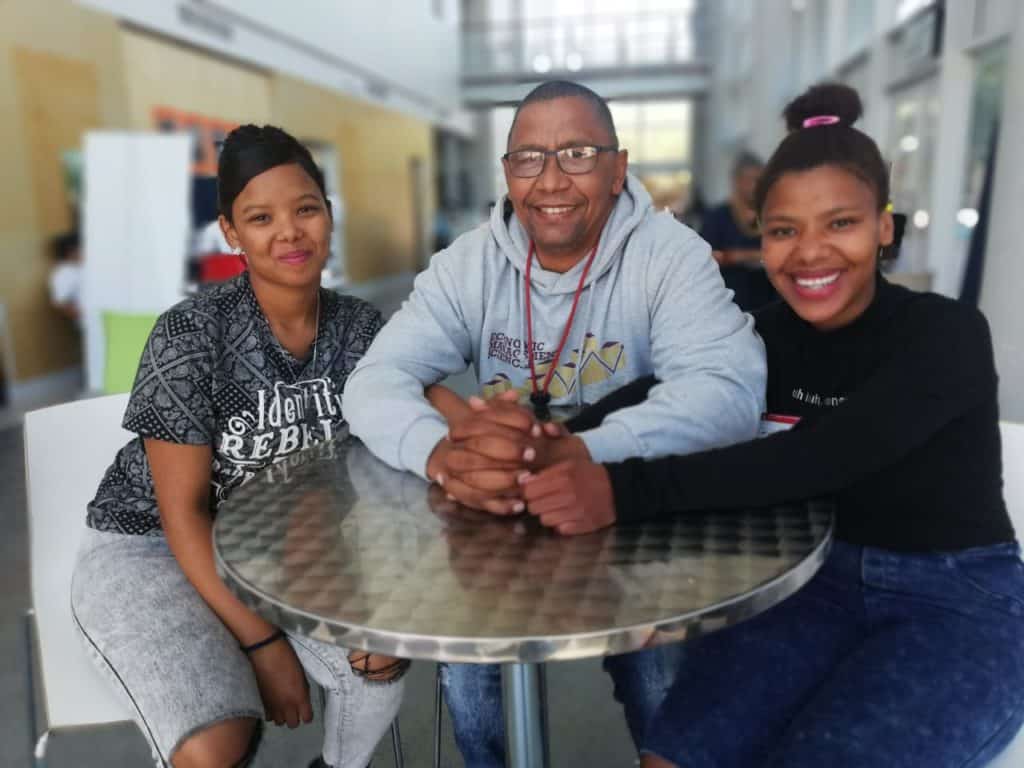 Charnell Jantjies (left) and Rozeanne Booysen (right) with Billy Claasen, who is helping them realise their dreams to become a social worker and nurse, respectively, at the National Conference on the Future of Farm Workers at the University of the Western Cape.

Charnell Jantjies and Rozeanne Booysen, both 21, had been asked by the Women on Farms Project (WFP) to recount to conference delegates their experiences of growing up on the commercial farms on which their families worked. Their stories – of hardship, constant hunger and thwarted dreams – is played out countless times on South African farms, and reduced both them and the conference delegates to tears. They spoke of how they and their friends lost the right to live on the farms once they turned 18. How they were encouraged to work on the farm rather than go study. And the many days they went without food. Charnell, now a business assistant student, shared a story of how she had to make a loan from someone so she could buy food for her parents on the farm.

But mostly they talked of their dreams – Charnell wanted to be a social worker, Rozeanne a nurse. They imagined lives where they could feed their families, and own their own land and homes where their parents could live happily and help their communities. And they spoke of how often they were discouraged from pursuing those dreams, and how increasingly remote they seemed.

“I often asked myself, who am I to want to become a nurse, I don’t even have a grade 12,” says Rozeanne, who has a two-year-old child. “But it was something I really wanted to do, and I often told myself it’s a dream that can come true if I just believe and keep that dream.”

But today that dream suddenly seems within reach.

Listening to the two young women speak, Billy Claasen, executive director of the Rural and Farmworkers Development Organisation, immediately got on the phone, through tears messaging contacts within educational institutions and departments. By the time they had finished speaking, Claasen had arranged full scholarships, which would also cover accommodation, for both young women. For Charnell, he had also organised admission to the Hugenote Kollege in Wellington, where she can start on a series of qualifications that can – depending on how well she does – lead to a degree in social work. Likewise, Rozeanne can next year start on a primary health programme at Vredendal College that will clear the path for further studies into nursing.

Welling up again, Claasen speaks of his own experiences growing up on a farm in Wellington. Of his family’s struggles. Of how he had wanted to be a lawyer, but had to drop out of school. But how, thanks to recognition of prior learning (RPL), he was eventually accepted for an advanced diploma in public administration at UWC. (He is writing a final paper on Monday.)

“I was determined to break that vicious cycle that many children growing up on farms end up in for myself,” says Claasen. “And today my dream is to break that cycle for other children and young people.”

For both young women, Claasen’s kindness opens lifechanging opportunities. Charnell talks of the times she had to study on an empty stomach because there was no food in the house. “It just made me realise that, no, I don’t want to stay here. That I didn’t want to follow the same path that my parents or my classmates at school had to walk.”

Today, for these two young women at least, new paths have opened up.

The National Conference on the Future of Farm Workers runs at the University of the Western Cape (UWC) from 16 to 18 October, and is hosted by UWC’s Centre of Excellence in Food Security and the Institute for Poverty, Land and Agrarian Studies (PLAAS), in partnership with the Women on Farms Project.