STATEMENT FROM THE DSI-NRF CENTRE OF EXCELLENCE IN FOOD SECURITY

As South Africa prepares to shut down for 21 days to counter the rapid spread of COVID-19, promises around the maintenance of food supply chains fail to take account of the fact that food security and nutrition are far more complex than fully-stocked supermarket shelves.

While we join the rest of the nation in congratulating President Cyril Ramaphosa for his decisive, targeted interventions, it is imperative to remember that access to food for the majority of South Africans is a multi-faceted challenge that requires judicious cognisance during this gruelling time.

The impacts and implications of the coronavirus pandemic remain uncertain. But, it is vital that we understand just how vulnerable South Africa’s poor are to the effects of COVID-19. Our most vulnerable citizens, especially children and high-risk groups such as the elderly, will suffer most if we don’t pay attention to safeguarding their nutrition.

It is indeed true that South Africa is food secure at national level. But the situation at household level remains dire, with food shortages and hunger still a matter for serious concern. Available data suggests that two thirds of our children live in poverty,  with one-third living in extreme poverty. If the projections of the International Food Policy Institute (IFPRI) are correct, the number of poor children in South Africa could increase by between 2 and 5 percent as a result of COVID-19.

Additionally, more than 800 000 children younger than six live in households that report food scarcity, with the consequent risks of malnutrition – and negative long-term effects on their health and educational outcomes.

These are the South African families on behalf of whom we want to raise a red flag, whose circumstances won’t only be impacted by how well supermarkets are stocked. Empty food shelves reflect panicky consumer stockpiling rather than disrupted food supply chains. South Africa is a surplus producer of food, and the value of the country’s food exports exceeds imports by a significant margin. In addition, many poor households do not access their food from supermarkets, but rather from spaza shops – fortunately exempted from the lock down – and informal street traders.  Suggestions that foreign owned spaza shops will not be exempted from the lock down are deeply concerning, firstly because these spaza shops are a vital part of the food system in the township economy, and secondly because such statements run the risk of fomenting xenophobic violence.

Evidence from other countries globally shows that COVID-19 will have a severe impact on all kinds of markets and services, including our already overburdened public health system. Little attention has been paid to its impact on the food system, but there are warning signals.  These include disruption of food safety controls, price increases, and increased consumption of high-fat, high-sugar and high-salt convenience food. We are extremely concerned, not about the availability of food in the country per se, but rather whether that food will be available to all our citizens at prices they can afford, in places that they can access, and that this food is nutritious and safe. 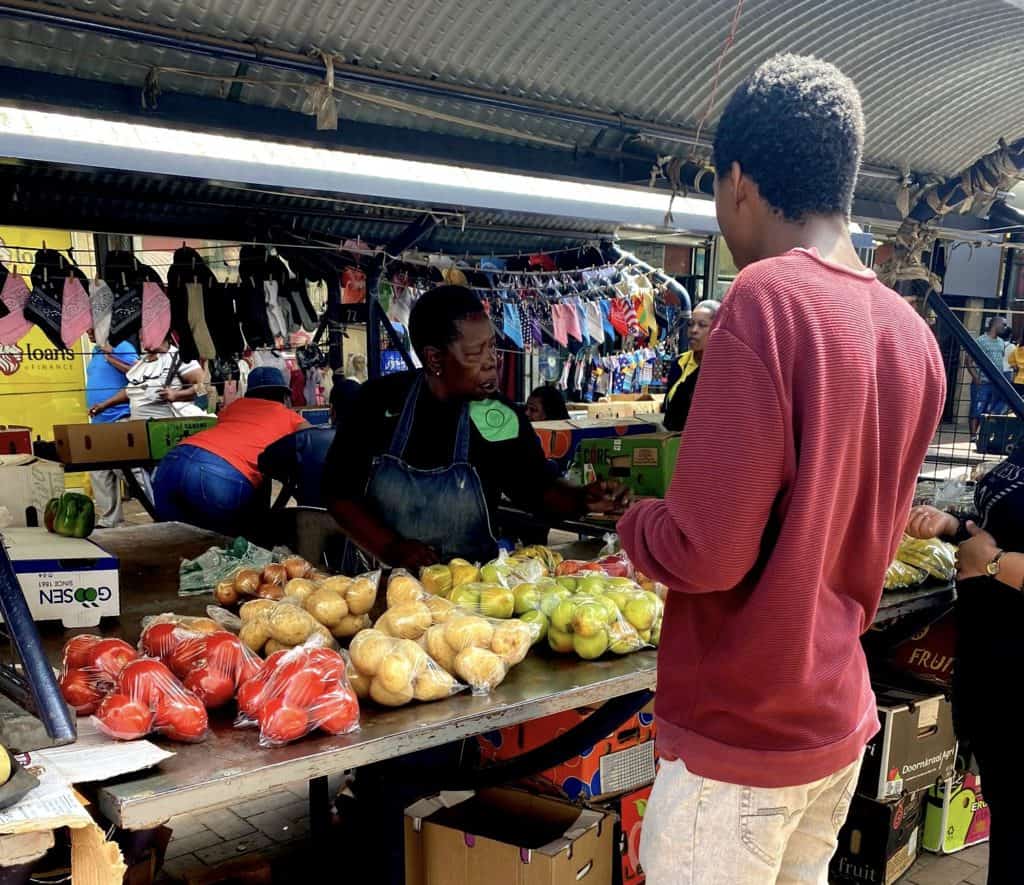 It is vital that we understand just how vulnerable South Africa’s poor are to the effects of COVID-19. Photo credit: @Agobakwe_m via Twitter

This week Business Day quoted Vuyo Mahlati, president of the African Farmers Association of SA (Afasa), which represents emerging farmers, warning that food insecurity poses a real threat. Expressing concern at the potential impact of the lockdown on the livelihoods of small-scale farmers and cooperatives in respect of both food availability and affordability, she reiterated our point that, at household level, food insecurity is a fact in both rural and urban areas.

We cannot ignore this reality on the eve of the shutdown. While wealthier families have the financial means to buy and store food, indigent families don’t have the money nor the storage capacity to do the same. To make things worse, many of the country’s poor have very little money for transactional purposes and almost no precautionary budget, because they live from payday to payday. And for others, there is no payday because they are unemployed.  Now, in the current crisis, many can no longer look forward to even that payday as businesses close their doors and some are forced to lay off staff.

While we are reassured by the news that social grants will still be available for collection during this period, we already know that the grants won’t go far enough. Dilution of these grants means they are used to support many more people that the target groups for which they are intended. It is reassuring that many private and civil society initiatives have been put in place.  But the 21-day lockdown might impact upon NGO’s and faith-based organisations that have attempted to fill the gaps.

What we don’t want to see in the next 21 days is added suffering for these families, and for their hungry children or the elderly.

For example, thanks to the closure of schools, although critical for controlling the spread of the virus, more than 9 million children no longer have access to the one healthy meal a day provided by school feeding programmes.

Emergency stimulus packages and cash injections have already been announced as part of the government’s response framework.  These are to be commended but much more needs to be done – urgently – to support the poorest of the poor in a way that recognises their circumstances.

At the very least, we need to pay attention to identifying those 9 million children who are no longer being fed, and providing their families with emergency food packages through-out the lockdown period.  This is surely not an impossible task if school authorities, social workers, social development officers and the authorities responsible for implementing the lockdown, coordinate their efforts.

In a situation where neither supermarkets nor the formal social grant system is able to do enough, extraordinary measures are called from society to make sure that the most vulnerable people don’t starve or face extreme malnutrition.

It is time for collective action if we are to ensure that the current crisis doesn’t add another layer of suffering to the lives of South Africa’s already most marginalised communities.