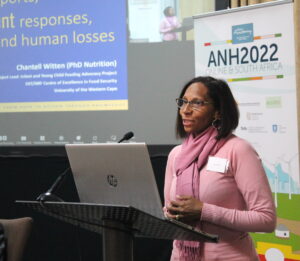 Even with the most progressive policies, children in South Africa are going hungry every day. This was one of the points that Dr Chantell Witten, the lead for the Infant and Young Child Feeding Advocacy Project of the DSI-NRF Centre of Excellence in Food Security (CoE-FS) made at the recent Agriculture, Nutrition and Health (ANH) Academy Week 2022.

“We need to take action now because children’s lives can’t wait. They can’t wait for agendas and they can’t wait for us to get our act together while we sit in boardrooms and presentations. Children are hungry right now,” said Dr Witten, who is also a member of the National Department of Health Ministerial Committee on the Morbidity and Mortality in Children under 5 years (CoMMiC).

Witten presented the opening provocation as one of five panellists in a plenary session on “Children and the Right to Food & Nutrition in South Africa”, at the ANH which was co-hosted by the Southern African Food Lab, the African Economic Research Consortium, the African Nutrition Society, and the Food Environment Research Network.

According to 28(1)(c) of the Bill of Rights of the Constitution, “every child has the right to basic nutrition, shelter, health care and social services, as well as the right to be protected from maltreatment, neglect, abuse or degradation”. But the reality is that many children in South Africa suffer from hunger and high levels of malnutrition.

Witten’s presentation at the academy week focused on infant and young child feeding.

Discussions about child hunger and malnutrition have been an ongoing national topic for 28 years. In 1994, the ANC government put together a national health plan for South Africa with cutting-edge science and best practice in nutrition programming from the World Health Organization and UNICEF. The Integrated Nutrition Programme (INP), led by the National Directorate: Nutrition and the respective provincial nutrition units, was designed for multi-sectoral action and collaboration. The INP drew on best practices from the joint WHO/UNICEF ‘Iringa study’ on child nutrition in Tanzania.

However, despite these developments, Witten experienced child malnutrition first-hand while working as a data collector in Mount Frere in the Eastern Cape in 2001 with the late Emeritus Professor David Sanders, who was conducting a study on child hunger and malnutrition in the area. The research led by Professor Sanders eventually led to the implementation of the child support grant by government.

“Today, we have one of the most advanced integrated nutrition programmes… in policy. It builds on all the interventions that need to be implemented within a country to reduce hunger.”

But even with plans, policies, and programmes in place, one in four children under five are stunted in South Africa due to poor nutrition. This figure has gone unchanged for the past 25 years, even though South Africa is an upper middle-income country and with the protections afforded to children in Section 28(1)(c).

“Over time, stunting has remained stubbornly high, compromising children’s growth and development and casting a long shadow into their adult years with increased risk of non-communicable diseases and compromised economic earnings,” explained Witten.

Time to turn the corner

At present, the National Dietary Intake Survey is being conducted, led by CoE-FS Principal Investigator Professor Rina Swart. Witten does not expect that results from this survey will indicate that stunting has decreased, considering the impact of the COVID-19 pandemic on the economy, South Africans’ income levels, job losses, and food prices.

“Stunting physically compromises children’s growth including the physical structure of the brain. What it actually means is that children are losing brain capacity which will affect their cognitive development, their education ability, and future earnings. Not only are they paying now through their ill-health, their suffering and indignity, but they are never going to be able to develop to their full potential because their hunger has a negative impact on them now.”

“In the future, they have an increased risk to develop non-communicable diseases like hypertension, diabetes, and cardiovascular disease. These all increase their risk of disease and premature mortality,” explained Witten.

Witten believes that the time has come to turn that corner and to look at child hunger and malnutrition as a social justice issue and begin focusing on child nutrition from when babies start to grow in their mother’s womb by ensuring that pregnant women have access to good quality and nutritious food. In addition, breastfeeding of babies up to six months needs to be protected from the influence and interference of the infant formula industry as mothers are the producers of infants’ first food in the form of breastmilk.

“Child malnutrition cannot be addressed unless the infant and young child feeding agenda is protected from the insidious and unethical marketing of inappropriate foods for and to children.”