Farm workers, let down by politicians, face new threats to their security

Their situation can be improved but is there the political will?

Farm workers are essential to the economy and food system, but they are poor and vulnerable to exploitation and abuse. Evicted farm workers, in particular, face an under-reported crisis of underemployment, poverty and hunger. At a time when the future for farm workers looks increasingly precarious, new thinking and fresh ideas are needed. Some of the challenges facing farm workers are explored here. 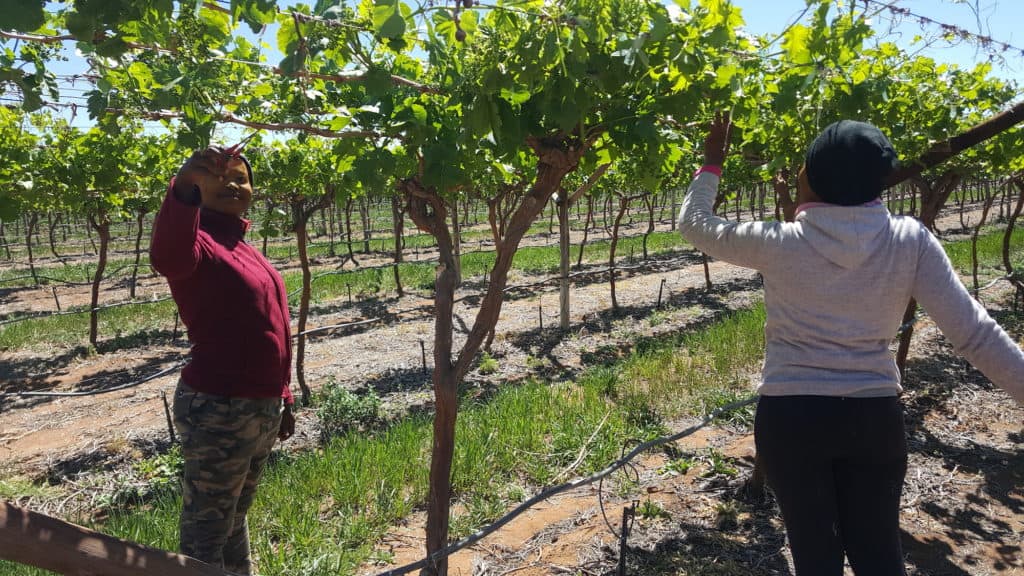 After 1994 a range of progressive laws were introduced to protect workers against exploitation and abuse. Farm workers were seen as particularly vulnerable and therefore received special protection under the Sectoral Determination for Farm Workers, which establishes legal standards for living and working conditions on farms, including the right to a minimum wage that is adjusted annually by the Department of Labour.

Research conducted by Women on Farms Project in the Northern Cape and Western Cape found that farm workers’ rights are routinely violated by farmers. More than two-thirds of women seasonal workers surveyed are not paid the legal minimum wage, do not have access to toilets in vineyards or orchards where they work, are exposed to dangerous pesticides within an hour after spraying and are not provided with protective clothes by the farmer, as required by law.

Very few farm workers are members of trade unions, often because farmers do not allow union representatives on their farms and do not allow farm workers to join a union. Similarly, few farm workers have seen Labour Inspectors visit farms where they work, to monitor labour conditions. With the Department of Labour not enforcing labour legislation and low rates of unionisation among farm workers, especially women seasonal workers, farmers continue to violate farm workers’ rights with impunity.

For decades an ongoing restructuring of South Africa’s agriculture sector has resulted in hundreds of thousands of farm workers being evicted from commercial farms and “casualised” – losing their homes and full-time employment and being rehired as seasonal or casual workers – or becoming permanently unemployed.

Legislation intended to protect farm workers and farm dwellers against eviction has instead been used by the farmers, almost as a manual for how to evict farm workers legally.

About 20,000 people currently face eviction from farms in the Drakenstein Municipality in the Boland. More than 1,200 cases are currently on the court roll, pending eviction orders being granted by the court. On separate occasions in 2018 Mcebisi Skwatsha, Deputy Minister of Rural Development and Land Reform, and Alan Winde, then MEC for Economic Opportunities and now Premier of the Western Cape, met with farm workers and farm dwellers in Simondium. However, as far as we can tell, neither politician has taken action to assist or intervene.

Before becoming president, Cyril Ramaphosa expressed his support for civil society demands for a moratorium on farm worker evictions. In 2014, while Deputy President, Ramaphosa asked farmers to halt all farm evictions. “We are calling on all farmers who have plans for evictions, to stop,” Ramaphosa said after meeting with farmers and farm labour representatives in Paarl.

But this plea was ignored and evictions – both legal and illegal – have continued. A blanket prohibition on legal evictions would likely require a constitutional amendment.

President Ramaphosa revisited this issue during the 2019 election campaign, when he met with farm workers in Citrusdal. He also told farmers in Stellenbosch that: “We face a serious challenge of evictions where farm workers are evicted”, and he urged farmers to treat their workers with humanity. This is a significant softening of tone from the total ban on evictions Ramaphosa appealed for five years ago. Now the elections are over and the President has been inaugurated, but there is still no sign that decisive actions will follow his sympathetic words.

New technologies could accelerate the forced removal of farm workers. Mechanisation is already displacing workers in commercial agriculture. Until recently, certain functions performed by farm workers could not be mechanised.

However, a report by the Western Cape Department of Agriculture and Stellenbosch University found that “smart farming” technologies such as satellite agriculture, sensors, robotics and drones could transform the sector. The report anticipates higher yields, reduced costs and higher profits for commercial agriculture, but it glosses over the consequences for employment on farms, which is likely to be substantially reduced.

While the focus in 2018 was on the expropriation of land, there is a need to focus on the redistribution of that land. Learning from the lessons of the land reform process to date, it is important that farm workers and dwellers are active participants in the conceptualisation and formulation of their specific land needs. For instance, land redistribution to farm women must be an explicit policy formulation; land must be conveniently located; land must be attached to other resources such as water rights and complementary support, and so on.

Since the process of amending the Constitution is likely to be protracted and contested by well-resourced, highly visible and vocal interest groups – not least commercial farmers – farm workers and dwellers will have to mobilise to ensure that their needs and priorities are firmly on future policy and legislative agendas.

The farm worker strike of 2012/13 demonstrated the power of protest. Farm workers in the Western Cape spontaneously protested for improvements in their working conditions, and achieved a 52% increase in their legislated minimum wage.

Resistance by farm workers takes many forms. Sporadic localised protests continue, such as a recent strike in Grabouw organised by the Commercial, Stevedoring, Agricultural and Allied Workers Union (CSAAWU), where workers campaigned for higher wages and an end to labour brokering.

These forms of protest confirm that farm workers do not perceive government as supportive of the challenges they face with their employers. Instead, farm workers and dwellers are organising, resisting and pressurising the government – through strikes, demonstrations, lobbying and other means – to have their voices heard, including to secure their rights and for land expropriation.

Indeed, as demonstrated during the 2012/13 uprising, while resistance might start around such specific issues, they also present an opportunity for farm workers to lobby for broader transformation of the sector – for agrarian transformation – which addresses inequalities of gender, race and class.

A national conference to explore these and related issues facing farm workers will be held on 16 to 18 October 2019, at the University of the Western Cape. The conference is jointly hosted by the SARCHI in Social Protection for Food Security, the DST-NRF Centre of Excellence in Food Security and the Institute for Poverty, Land and Agrarian Studies, in association with Women on Farms Project and the Institute for Social Development at the University of the Western Cape.

Devereux is at the University of the Western Cape. Solomon is Director of Women on Farms Project.

This article was originally published by GroundUp.