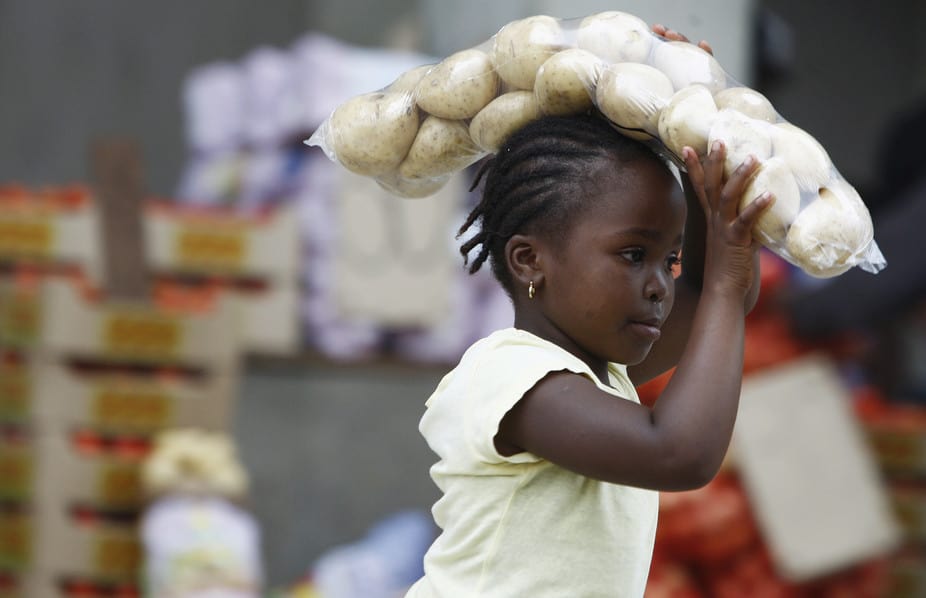 A young girl carries a bag of potatoes as she leaves a vegetable stall in Kliptown, Soweto. Reuters/Siphiwe Sibeko

Up to 70% of households in South Africa’s informal settlements skip meals or eat the same meal on most days. The breadwinners also regularly struggle to provide meals or worry about having no food or money to buy food.

And households with children are even more likely to face this dilemma of food insecurity. Our research found that the levels of food security remains significantly high in the country – despite it being a basic human right.

Although we conducted the study on a small community in Johannesburg, this is a reality for people who live in informal settlements across the country.

Census data in South Africa suggests there are 1.2 million households with 3.3 million people living in informal corrugated structures (shacks) which are not on the same property as formal brick houses. The country’s economic hub, Gauteng, has the second highest percentage of people living in shacks in the country.

The global goal around hunger

The United Nation’s Food and Agriculture Organisation defines food securityas having access to enough food for an active and healthy life. This includes readily available, nutritionally adequate and safe foods. People should be able to get this food in socially acceptable ways. And to be food secure, one must also be free from worry or anxiety about having enough food for everyone living in a household.

Halving hunger in the world was the first of the eight anti-poverty millennium development goals, set in 2000. But improvements in food security have not happened fast enough or evenly across the world to have achieved this goal.

Between 2010 and 2012, 852 million people in developing countries did not have food security. Of these, 234 million lived in sub-Saharan Africa.

In South Africa, several studies have assessed the degree and impact of food insecurity. Three national surveys show that in the ten years to 2008, food insecurity halved. In urban areas, it dropped from 42% to about 20%.

But this trend did not remain for long. A 2009 study in three impoverished communities in Johannesburg shows that just over half of the households surveyed did not have food security. Of these, 60% were in informal settlements.

There are many reasons for an increased risk of food insecurity. These include:

People cope with food insecurity by decreasing the variety of foods they eat, limiting their portion sizes, and eating cheaper fast foods. Research shows this negatively affects their nutritional status.

This inevitably results in under-nutrition or malnutrition, which is a lack of adequate micronutrients. Malnutrition is a major consequence of chronic food insecurity.

Globally, more than 2.5 million children die each year from malnutrition because of food insecurity. Sub-Saharan Africa has the highest rates of underweight children and infants, with just over 24% recorded between 2010 and 2012.

Its child mortality rate is also high. 41 children under the age of five die for every 1000 that are born.

In South Africa, the national surveys have shown that poor children have an inadequate diet. It does not meet nutritional requirements and they eat a limited variety of foods.

Children who are undernourished are often underweight and suffer from stunting. Stunted undernourished children are at risk of poor development and decreased academic achievement.

How to solve the problem

The Medical Research Council has provided vegetable seeds to participants and local non-governmental organisations to plant fruit trees in one of the study sites.

But in the medium and long term, solutions such as increased employment opportunities, education and female empowerment is required to significantly lessen the burden of food insecurity.

The Medical Research Council conducts this study annually as part of its urban health program under the World Health Organisation Collaborating Centre for Urban Health. It has been running for nine years. The study’s findings are fed back to the City of Johannesburg to take action.