Learning from the evolution of state-subsidised university restaurants in Brazil, is an important consideration for universities in the global South currently dealing with how to end student hunger on campuses. This blog unpacks the strengths and weaknesses of the state-subsidised university model with Brazil as the case study. It is specifically intended to inform current debates in South Africa, spearheaded by the Dullah Omar Institute at the University of Western Cape through South to South academic conversations.

Student restaurants in Brazil began in the 1950s and evolved with the expansion of universities ever since.  University restaurants were the nucleus for student movement discussions, organising struggles, film screenings, music groups and parties. It is a space for meetings and debates, and where most students have lunch in groups; turning meals into a collective construction. 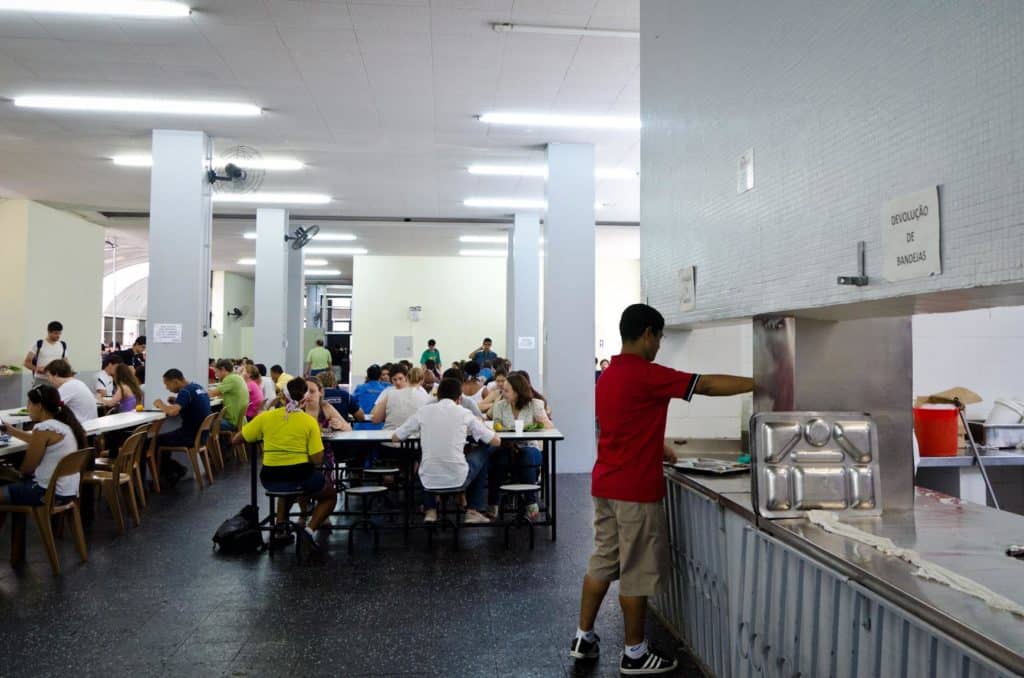 The state-subsidised student restaurant model is linked to public policies supporting the retention of low-income students enrolled in federal higher education institutions. The goal is to enhance equal opportunities for all students, and contribute to the improvement of academic performance. In dozens of federal universities, low-income students are subsidised, or they have free access to the restaurants. Reforms, extensions and equipment purchases at the student restaurants materialised by using National Student Assistance Plan funds. This took place under the centre-left government of the Workers Party (2002 to 2011).

The National Student Assistance Plan, as part of the educational process, links to teaching and research which enables the transformative character between universities and society. This plan has 10 guidelines for the development of student assistance: migration and housing; food; maintenance and work; means of transport and health; access to the library; access to cultural activities, sport and leisure; basic computer skills; foreign language domain; and social movements.

Several surveys conducted over the past 10 years show that low-income students supported by the National Student Assistance Plan have completed their courses in a shorter time, have a lower dropout rate and higher academic performance than regular students.

With prices below R$3 (less than a dollar), some universities also excel in the quality of service provided to the academic community, as well as respecting the environment. At UnB and the University of São Paulo (USP), mugs replaced plastic cups, and some universities are joining agroecological programs, campaigns against waste, composting organic waste and making vegetarian menus.

The Federal University of Paraná (UFPR) and UNICAMP’s restaurants serve around 15,000 meals per day—all subsidised by the Brazilian State to the amount of R$2.8 million in each university. Students at UFPR pay one of the cheapest rates per meal in Brazil: only R$ 1.30 per meal (around US$ 0.40). Moreover, the price has not changed in last 17 years. In addition to this, students at the Federal Rural University of Amazonia eat free of charge at their university restaurant.

However, there are some weaknesses in this programme, from which other countries in the Global South can draw strategic lessons. The reduction of restaurant workers, uncertain employment systems, non-replacement of machinery, restaurant growth, and underperforming student expansion in universities created a precarious panorama in student restaurants. This process began about 12 years ago with cleaning work, and has gradually reached the kitchen area. When the service is 100% outsourced, student restaurants end up much more expensive – around R$6 to R$8 on average per meal. In the UNICAMP student restaurant, the number of workers were 200 and now there are only 45.

Since the beginning of the students’ restaurants in the 1950s, the price of the meals was a struggle theme. In January 2018, students from UnB mobilised against a proposal to increase the university restaurant fare. Meal prices inflated by 108% from R$ 2.50 to R$ 5.20. In 2018, UnB saw a resources cut of 45% due to the fiscal crisis promoted by the current neoliberal government.

In 2019, the Bolsonaro government cut the higher education budget by 30%, hitting basic public university services, and further undermining student restaurant functions. If contingency is maintained, several student restaurants will be closed for lack of resources. This means the disarticulation of thousands of students in Brazilian public higher education, obstructions in the development of research and technology, as well as the destruction of sociability and social organisation spaces. This is a key area of social movement mobilisation. However, students might have to be ready to struggle for (previously successfully implemented) public policies and for educational spaces that promote equal access.

Débora Lima recently completed her PhD in Geography at Campinas State University, Brazil. She is currently is a post-doctoral researcher at the University of São Paulo, Brazil. Lima has collaborated with Brazilian social movements – especially the Pastoral Land Commission – sharing information about acquisitions of farmland by foreign companies, illegal soy farms, and land conflicts, and supporting the resistance of peasant communities.

From the outset, the Western Cape Food Governance-Community of Practice (FG-CoP) was an ambitious exercise in ‘knowledge co-production’. The aim…

South Africa’s student hunger crisis – and how to address it

“There is no programme that looks at [students’] access to healthy and sufficient food. Student food insecurity has always been…