The effects of climate change on food security are not evenly distributed across the globe. So said Professor Ndiko Ludidi, acting director of the Centre of Excellence in Food Security, during his presentation at the Bio Africa Convention 2019, underway at the Durban International Convention Centre.

Although intensive agriculture has led to sufficient food production to enhance food security, the effects of climate change on crop and livestock production place these gains at risk. “This can have a disastrous impact on food security,” Ludidi said.

In his presentation, Climate change: The current/next big threat to food security in Africa, Ludidi added that, “Tropical and subtropical countries – like those found in Southern Africa – are most exposed to climate risks.” These areas also happen to be home to a large portion of the world’s most food-insecure people, he noted.

Ludidi explained that climate change has also altered the availability and distribution of freshwater fish and other marine food sources; echoing assertions made by  Professor Emmanuel Kaunda of Lilongwe University of Agriculture & Natural Resources in Malawi, during his presentation under the theme: Threats to food safety and security in Africa.

According to Ludidi, “Climate change affects food security for the poor more than it does for everyone else.” This is because food security depends not only on how much food is produced, but also on distribution, affordability, and culture and health status. In addition, climate change can alter food production. As a result, this can have adverse impacts on food choice and consumption for the poor as food becomes more expensive.

Additionally, climatic extremes can affect safety and nutrition quality of food. According to Julie Mokwele of the Department of Agriculture and Land Reform, “Rising temperatures can increase the prevalence of plant pathogens.” This could introduce new food-borne pathogens into the food system, she added.

What can be done? 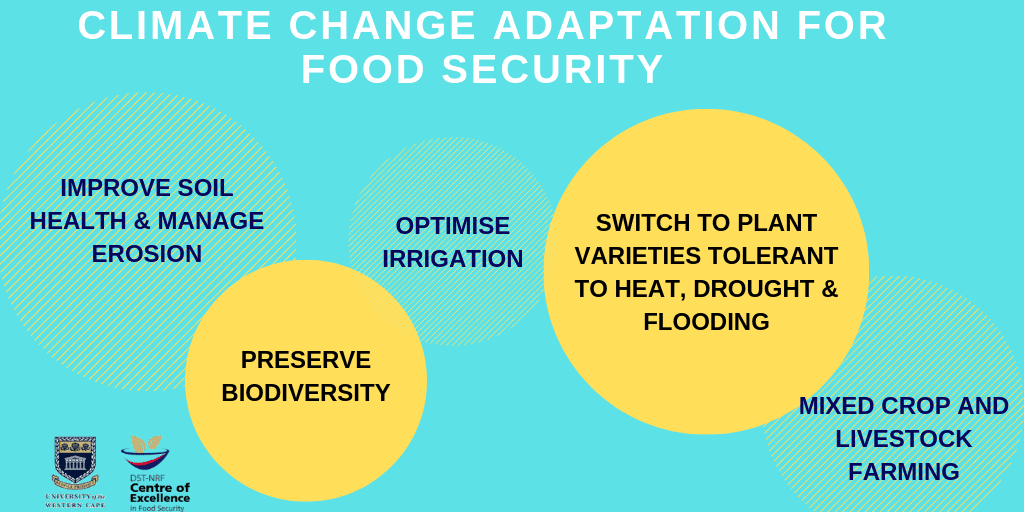 Improved investment is key to adaptation and prevention. Improving capacity to regularly check on food transported across countries is one way to facilitate early detection and minimise cross-border transfer of plant pathogens, said Mokwele.

At the same time, it’s important to “allocate resources to locations and populations where adaptation needs are greatest (especially for vulnerable small-scale producers,” said Ludidi. He emphasized that modern and conventional breeding technologies, in which scientists cooperate with local and regional farmers, are some of the most effective adaptations measures. But they require 5-20 year lead times for release of new varieties of crops and livestock. It is thus crucial to increase investment into such breeding programmes urgently.

The three day Convention concludes today at the Durban ICC.