While social media is full of memes of people bemoaning their additional lockdown kilos, millions of South Africans are at risk of going hungry. The scale of the problem is daunting and requires a coordinated response from government, business and civil society.

Covid-19 lockdowns across the world have unleashed a range of unintended consequences, sparking a global economic crisis that has magnified fault lines in society, particularly in developing nations already burdened by high levels of income disparity.

As the lockdowns continue, the situation is threatening to evolve from a public health emergency into a full-blown humanitarian crisis. Millions of people’s livelihoods have been disrupted, leaving those living from hand to mouth unable to feed themselves or their families. At the same time, disruptions to the increasingly global food value chain have exacerbated legacy problems with food security.

The UN has warned that an additional 130 million people will be pushed to the brink of starvation by the end of 2020 as a result of the Covid-19 crisis. This will add to the 821 million people who already experienced food insecurity before the pandemic hit.

While supply-side shocks will likely be transient in developed nations, with supply chains ramping up quickly once governments restart their economies, it is in poor and emerging economies where the greatest threat to human life lies.

The UN World Food Programme’s (WFP) Executive Director, David Beasley gave a dire warning in April, stating that the world stands on the brink of a hunger pandemic as it battles the Covid-19 pandemic: “There are no famines yet. But I must warn you that if we don’t prepare and act now – to secure access, avoid funding shortfalls and disruptions to trade – we could be facing multiple famines of biblical proportions within a short few months.” 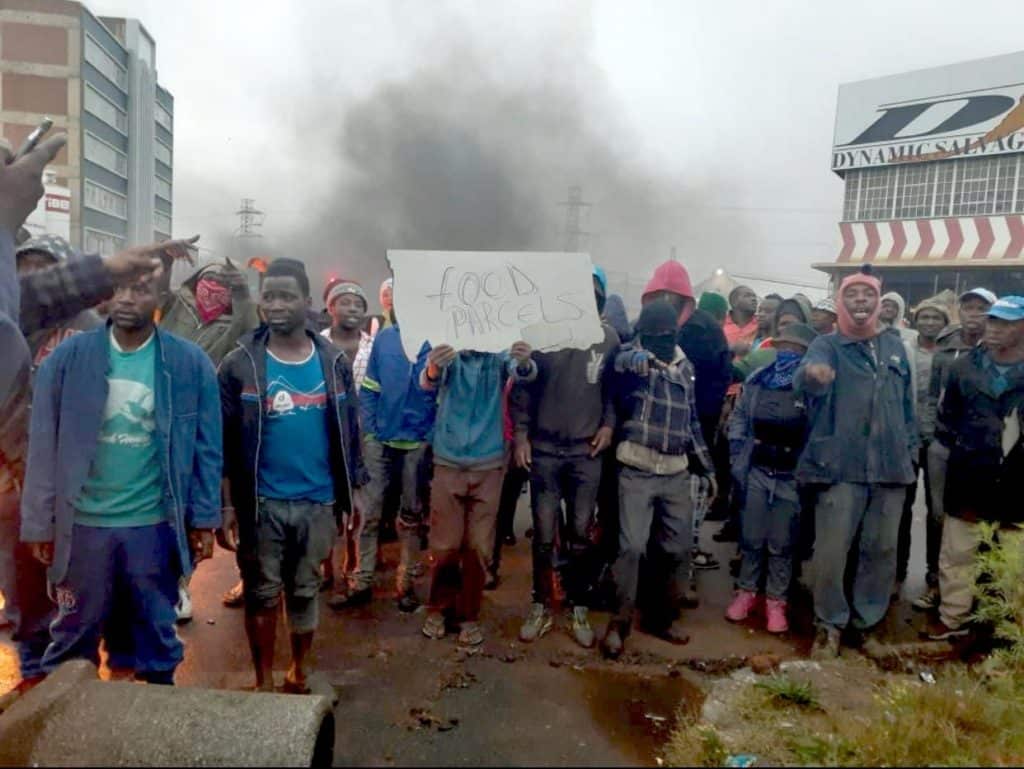 Some communities appear to be approaching boiling point, with reports emerging of social unrest including the looting of supermarkets, spaza shops and food delivery trucks. Image by JMPD

The fields are full, but the plates are empty

In South Africa, the main driver of food insecurity is primarily one of access and affordability associated with high levels of inequality and unemployment. The supply side, at least for now, is in good shape, with sufficient food available to sustain every household through domestic food production and imports.

This security of supply is a key factor in ensuring food availability, and according to Prof. Julian May, director of the Centre of Excellence in Food Security (CoE-FS) at the University of the Western Cape, the country has sufficient reserves. “Commercial and subsistence farmers have largely had success in bringing in harvests, with enough local crops available, such as maize, to avert a major supply crisis in the short term.”

Prof. Lise Korsten from the Department of Microbiology and Plant Pathology in the Faculty of Natural and Agricultural Sciences at the University of Pretoria, and co-Director of the CoE-FS explains that commercial farming operations were particularly resilient as lockdown restrictions went into effect.

“While large-scale production systems are complex, they are sophisticated and run on international standards. This ensured they already had washing stations, hygiene practices, and worker training, which somewhat prepared them to meet operational requirements such as social distancing and hygiene in lockdown.”

The scale and impact of the restrictions, however, caught many off-guard and had a material impact on farm efficiency and the volumes harvested.

“Several agricultural sectors were mid-harvest when lockdown restrictions came into effect. This meant much of the labour force couldn’t travel; and many farms rely on temporary migrant workforces during harvest to scale up.”

Despite the challenges, Prof. Korsten says there is a remarkable story behind the food value chain’s efforts to ensure the current harvest was collected with minimal wastage. “The industry largely met the increased demand caused by pre-lockdown stockpiling. And when this demand collapsed, the sector worked quickly to divert the surplus into the informal market and to donations.”

“I would rather die of Covid-19 than of hunger”

Despite this abundance of food nationally, a lack of food at a local level has raised tensions. Some communities appear to be approaching boiling point, with reports emerging of social unrest including the looting of supermarkets, spaza shops and food delivery trucks. According to News24, a Cape Flats resident told an ANC councillor, “I would rather die of Covid-19 than of hunger.”

The situation becomes most desperate where children are concerned, and some eight million South African children are currently missing out on daily government-sponsored meals due to school closures. This sudden loss of an important supplementary source of sustenance has hit particularly hard in a country where 27% of children under age five are stunted – a condition caused by undernutrition that affects the cognitive and physical development of children – shocking for a country that is ranked the most food secure in Africa.

“While food insecurity and self-reported hunger have declined in South Africa in the last 20 years, child stunting remains flat and high, despite the country’s high GDP per capita,” explains Prof. May.

“The main factor in this regard is affordability. While our research shows that caregivers generally spend grant money on food for their families, with low levels of grant misuse, the amounts remain too low to ensure a nourished child, and often support too many people beyond just the children.”

“Our people need to eat”

Tellingly, when President Ramaphosa addressed the nation on 23 April, he prefaced comments on resuming economic activity in South Africa by explaining that, “our people need to eat”.

Government’s initial short-term emergency response was to bolster financial assistance to the most vulnerable in society: increasing grant payments that put cash into the pockets of the hungry was the most straightforward short-term solution.

Beyond these measures, President Ramaphosa committed to scaling up “welfare provision during this period to help households living below the poverty line.” The Solidarity Fund has also made R120 million available to provide food relief to distressed families and has started delivering food parcels to more than 250,000 households across South Africa.

In this regard, Prof. May asserts that government is positioned to provide financial support via the social grant system, which works efficiently. However, it isn’t well equipped to address localised food security problems.

“There is good evidence globally that community-based organisations are the best placed to identify areas of high food insecurity because the government largely relies on census data to identify requirements. As these surveys only happen every 5-10 years, the data is often dated.”

With supply secure for the coming months, South Africa’s immediate food security threats are about access and utilisation – challenges that can’t be addressed through a top-down approach. A public-private partnership that includes the presence of a trusted and impartial local intermediary, like a Civil Society Organisation (CSO) or Non-Governmental Organisation (NGO), is therefore imperative to arrange equitable distribution and ensure donations and funds are spent according to their intended purpose.

Apart from these logistical considerations, Prof. May adds that “anything that is seen to come from the state is controversial, which is why the NGO/CSO model is best in my opinion, with the state offering financial support to boost affordability.”

The public-private partnership for equitable and effective food distribution is the model that has been adopted by FoodForward SA, the largest food redistribution organisation in South Africa. With over a third of all food produced in South Africa being dumped in landfill, FoodForward recovers quality edible surplus food from the consumer goods supply chain and distributes it to 900 community organisations that have the capacity to reach up to 1 million households. Last year, FoodForward distributed 1,500 tons of food, providing recipients with 20 million meals.

“Over the years, we have built a resilient and complex supply chain,” explains Andy Du Plessis, Managing Director at FoodForward SA. “Our cold-chain logistics network collects food from our agricultural and retail partners, who supply us with excess food or mislabelled products that cannot be sold.”

The organisation’s Foodshare digital platform also seamlessly connects beneficiary organisations to major retail partners, including Woolworths, Food Lover’s Market and Pick n Pay, to direct surplus food to those areas that need it most. “This helps our suppliers reduce wastage, and they receive a section 18a tax certificate for their donation. Plus, there is an environmental benefit because every ton of food recovered removes four tons of greenhouse gas emissions into the atmosphere,” adds Du Plessis.

FoodForward is also ensuring efficacy, while minimising the risk of corruption by verifying that all food parcels reach their intended recipients. “Our beneficiary organisations have to confirm who gets parcels. They record the name, address, identity and cellphone numbers of each recipient, which we then verify,” says Du Plessis.

The new face of capitalism

The work that FoodForward does is made possible by several corporations who are stepping up to plug the gaps left by a financially constrained government. From banks offering “payment holidays” for individuals and special loans for small businesses, to retail landlords relaxing their rental repayment terms and offering up their buildings for quarantine sites, businesses are demonstrating a level of empathy not seen before.

The current Covid-19 crisis has been a test case for ‘stakeholder capitalism’ – a term that dominated the news out the World Economic Forum in Davos earlier this year. “Companies are realising that in order to thrive in the long term, they need to create value for their customers, employees, suppliers and their communities – not just shareholders,” says Tanya dos Santos, Investec’s head of group sustainability. “In addition to supporting several other initiatives, Investec is partnering with FoodForward by sponsoring R5 million to provide 100,000 vulnerable beneficiaries with two meals a day for a month.”

In 2019, Investec chose to focus its sustainability efforts on six UN Sustainable Development Goals (SDGs). Dos Santos explains that food security wasn’t one of them, given that it was not one of South Africa’s most pressing issues before the crisis. “Access to education, water and clean energy are areas we’ve always been heavily involved in, but with the onset of the pandemic, we pivoted our sustainability strategy to focus in on healthcare and food security as areas that required the greatest support during the current crisis.”

A key milestone in this journey, says Dos Santos, was realising that the challenge went beyond getting food to those in need. “With malnutrition and child stunting on the rise in South Africa, we wanted to improve access to nutritious food. We felt this would benefit the most vulnerable in society, particularly as poor nutrition affects immunity.”

Alongside Investec, there are countless other examples of companies, government bodies and non-governmental organisations like FoodForward stepping in to assist. But with an estimated 30 million South Africans requiring food parcels in the midst of the Coronavirus crisis, the scale of the challenge is daunting. It is clear that more corporate actors need to step up and become part of the solution. But efforts to date make it clear that while South Africa may suffer from a lack of means, there is no shortage of will across all facets of society to ensure that our most vulnerable do not go hungry.

“One of the silver linings that is emerging from this crisis is that the business narrative is changing,” says Dos Santos. “We are all in this together and our hope is that stakeholder capitalism becomes the new normal.”

This article was first published by Investec. Read the original article here