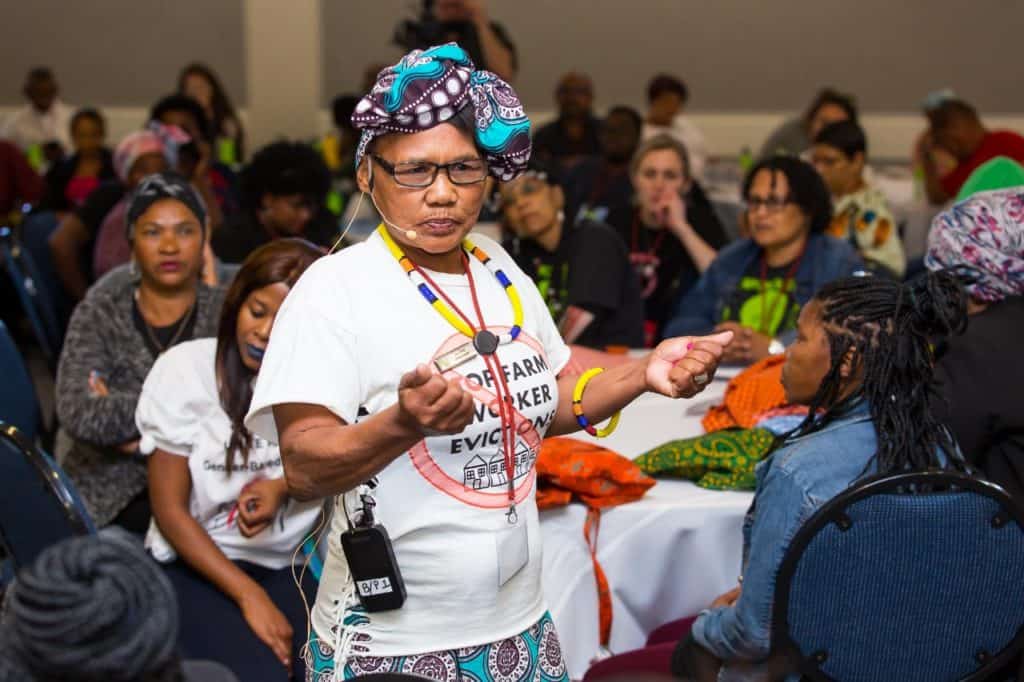 We are people without food because we are seasonal workers, said Bettie Fortuin.

The generous meals served to farm workers attending the National Conference on the Future of Farm Workers in South Africa only served to remind them of the families they had left behind on the farms, often with little to eat.

So said Bettie Fortuin, a farm worker and representative of the Women on Farms Project (WFP), at the opening of the conference at the University of the Western Cape (UWC) on 16 October 2019. “The food has a bitter taste,” Fortuin pointed out.

As such, the notion of World Food Day, also commemorated on 16 October, meant little to farm workers in South Africa, she added. And seven years since the 2012 Western Cape farm workers strikes when farm workers had made headlines protesting conditions on, especially, fruit and wine farms in the province, little has changed for farm workers, said Fortuin. “Even now, we are still being evicted, we are still people without food because we are seasonal workers.”

Having farm workers speak – they dominated the programme on the opening morning – alongside academics and researchers was a distinct feature of the conference, explained organisers. “So this is very much not your standard academic conference,” said Professor Stephen Devereux of the national Centre of Excellence in Food Security based at UWC.

Having farm workers speak was also integral to the aims of the conference, explained Professor Ruth Hall of UWC’s Institute for Poverty, Land and Agrarian Studies. As much as the conference will seek to look back at the forces that shaped the present predicament of farm workers, and explore that present in some detail (issues of land, evictions and food insecurity), it will also aim to look ahead at the future of farming and farm workers in the country.

“It seems to us as convenors of this conference that nobody seems to have a good idea as to what should be done,” said Hall. “We feel that there is no overarching plan.”

Between academics, farm workers and other stakeholders, the conference will aim to come up with some plan that can be presented to government. This plan will address, among other things, the increased use of technology in farming and the consequent phasing out of human labour, and the impact of this on young people on farms.

The National Conference on the Future of Farm Workers runs from 16 to 18 October.