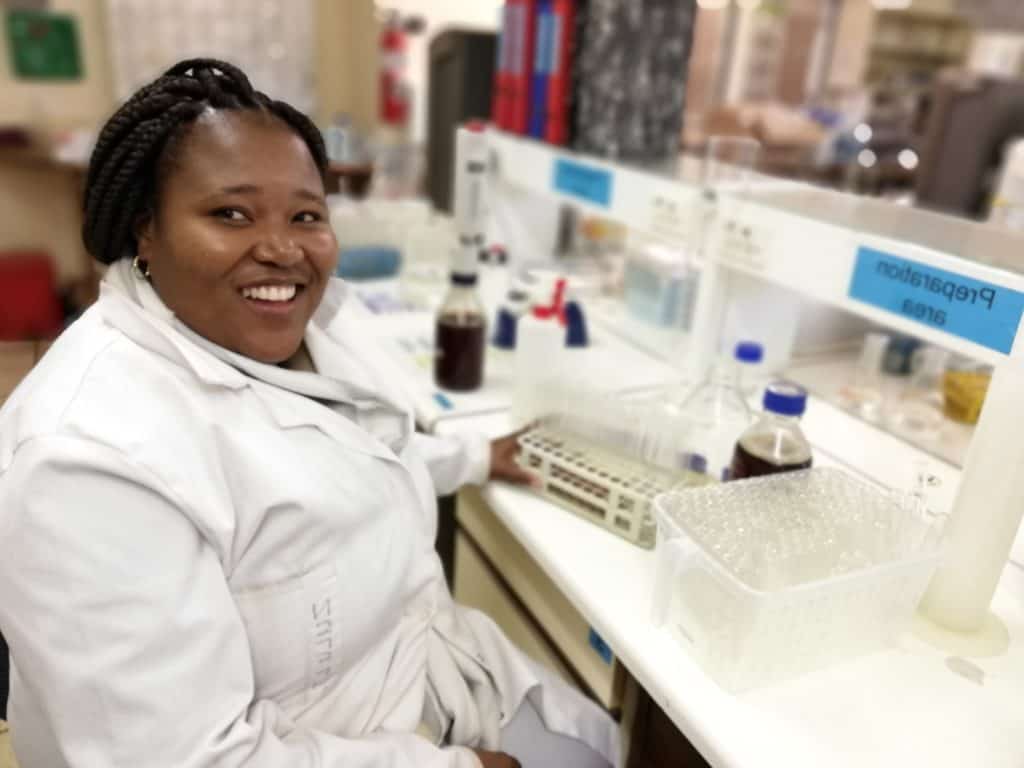 Degracious Kgoale had to do a lot of fieldwork for her PhD research, but it is in the lab that she comes into her own, she says.

For good reason, nutritionists love spinach, whom some have rightfully dubbed a ‘superfood’. It’s packed with vitamins and nutrients, and has been associated with everything from healthy hair and skin to lowered risk for cancer and the control of diabetes.

But its physical properties – rough leaves and roomy structure – also make it vulnerable. Waterborne pathogens, as research by the University of Pretoria has suggested, could for example easily attach to the leaf surfaces. (Luckily, it’s a risk that can easily be circumvented by a good cleaning, although that is often easier said than done, depending largely on ready access to clean water, for instance.)

A lot of the legwork on that UP research on morogo – aka African spinach – was done by Degracious Kgoale, a PhD student supported by the Centre of Excellence in Food Security (CoE-FS). Kgoale is based within the food safety research group led by Professor Lise Korsten, co-director of the CoE-FS.

It was Kgoale who collected morogo samples from small-scale farms across the North-West, Gauteng and Mpumalanga Provinces. She also took water and soil samples, potential sources of the infiltrating pathogens. In addition, she also purchased samples from informal traders and formal retailers, trying to understand if pathogens could later be transferred via handling or storage conditions, perhaps.

That fieldwork is done. But now Kgoale – who barely stops smiling throughout the interview for this article – has to sift through the mountains of data she’s accumulated. She’s not only trying to figure out how and where pathogens are making their way onto the morogo, but also characterising them – are the pathogens on the morogo the same at both harvest and selling points? Do the pathogen loads exceed health regulations, and how much of a risk do they pose to consumers?

There are parts of that process Kgoale is looking forward to. “I love lab work,” she says with another big smile. But there are also parts she dreads, she admits, smile fading just a bit – the writing. It was the bane of her master’s studies, she says. “You do all that writing, you submit and then it comes back with all those revisions!”

But for as long as she can remember, she always knew she was going to be a scientist, she says. For a while she thought of becoming a mechanical engineer or even a medical doctor, but it was biology that drew her to science research.

But wouldn’t she have liked to have been called ‘doctor’? “No, especially when I discovered I could still become a doctor of plant biotechnology.” More laughter.