Over the past five years, the Centre of Excellence has sought, through research, to help the country reverse course on stunting and childhood obesity

A few years ago, researchers faced a thankless task: how to explain why, after 20 years, Africa’s “most comprehensive” social welfare programme had failed to make any significant headway into the chronic malnutrition of children in South Africa. 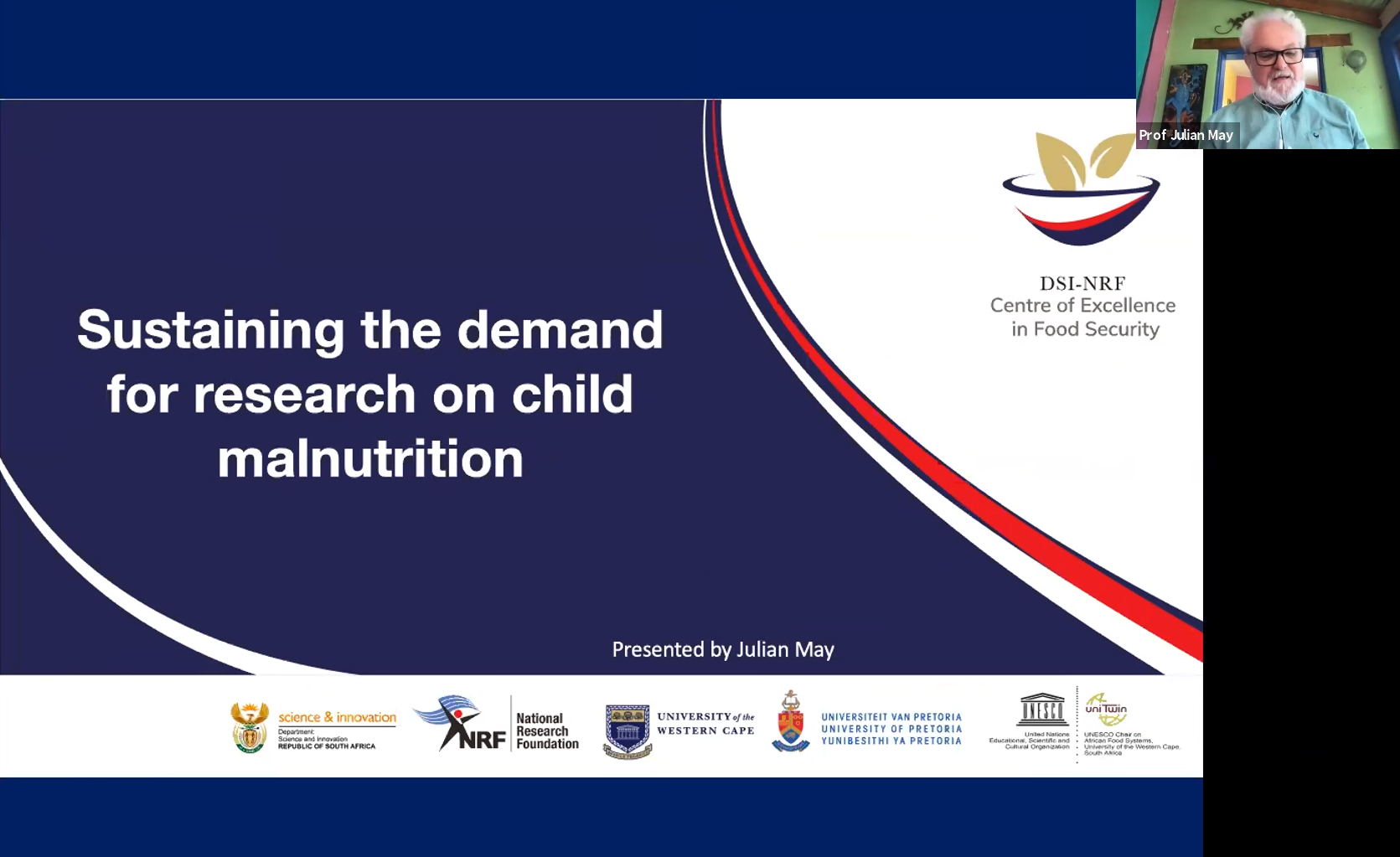 Prof Julian May spoke about the impact of research being conducted by the Centre on child malnutrition in South Africa.

More than that, researchers had to make sense of a glaring paradox of food security in South Africa: how one in four children aged five and younger are stunted – an indicator of chronic malnutrition – while at the very same time childhood obesity is on the rise. Where had we gone wrong while the likes of Brazil had reduced childhood stunting by over 80% between 1974 to 2007 with similar policies?

Scholarship faced a paradox of its own: “South Africa is a global leader in research in this field, but have failed to explain unchanged stunting for over two decades,” summarised Professor Julian May.

Prof May, director of the DSI-NRF Centre for Excellence in Food Security (CoE-FS), was addressing a webinar hosted by the Research & Innovation Office at the University of the Western Cape (UWC) at the end of April. The meeting was dedicated to the issues of research sustainability and impact.

In line with the policy of its funder, the National Research Foundation, the CoE-FS aspires to ensure that its research is making a real impact. To do so, the Centre took a number of positions for its work on child malnutrition, explained Prof May. Among these, “as a publicly funded centre, we believe that we a duty to act”. It took cognisance that food security is a complex, multidimensional ‘wicked problem’ for which there are no right and wrong solutions, only a continuum of options from bad to good. The Centre also adopted a whole-of-society model, appreciating that an answer, if any was forthcoming, demanded more than just the commitment of the public sector. And it looked for opportunities through which research can have an impact, such as with work on the Child Support Grant.

More than that, the Centre committed a large chunk of its resources – secured from the National Research Foundation (NRF) and other organisations – to its child malnutrition work. It also struck up partnerships with scholars both locally and abroad.

More recently, the Centre joined forces with a “trusted” partner in the Children’s Institute (CI) at the University of Cape Town. The CI has a long history with its annual ‘Child Gauge Report’, a publication that is highly respected by civil society, government and international agencies such as UNICEF. At the beginning of this year, the CoE-FS and the CI released the 2020 edition of the Institute’s ‘Child Gauge’ annual review, dedicated to ‘Food and Nutrition Security’.

The work identified new drivers of child malnutrition, including the physical environment in which children live, constraints on the ability of mothers to engage in exclusive breast-feeding, and food environments that result in poor diets and childhood obesity. Ultimately, insufficient income in the face of high employment, limited livelihood opportunities and an inadequate child grant remain critical, pointed out Prof May.

“What was important was to have the intention to influence from the outset,” he observed. “We always intended to try to influence and engaged with policy makers from the inception of the study.”

That isn’t always a guarantee of success, however, he acknowledged. Despite the best efforts of researchers and advocates to, for instance, have the value of the Child Support Grant increased substantially over the past years, Treasury has been more conservative, granting only modest increases, especially in the 2021 budget. “So you may influence a policymaker in a department, but if you fail to influence the person who holds the purse strings, you’re not going to get very far,” Prof May noted.

But the issue is too important for researchers to give up on, he added in closing.
“We need to believe that this all matters,” he said. “Personally, I believe that children do.”