It was interest in food microbiology that drew Manana Dlangalala to University of Pretoria, to join the food safety group of Professor Lise Korsten.

Unlike most of her peers in the food safety research group at the University of Pretoria (UP), Manana Dlangalala didn’t start off in plant pathology, and she didn’t come through the UP ‘production line’.

Instead, she completed her BSc degree in Molecular Biology and Biotechnology at Stellenbosch University. And her honours studies, also completed at SU, couldn’t have been further removed from plant pathology. She developed a laboratory technique called Real-time Reverse-Transcription Polymerase Chain Reaction to measure the Feline Immunodeficiency Virus (FIV) load in African Lions (Panthera leo). (African Lions in Africa are said to have the highest prevalence of FIV, sort of the cat equivalent of HIV.) 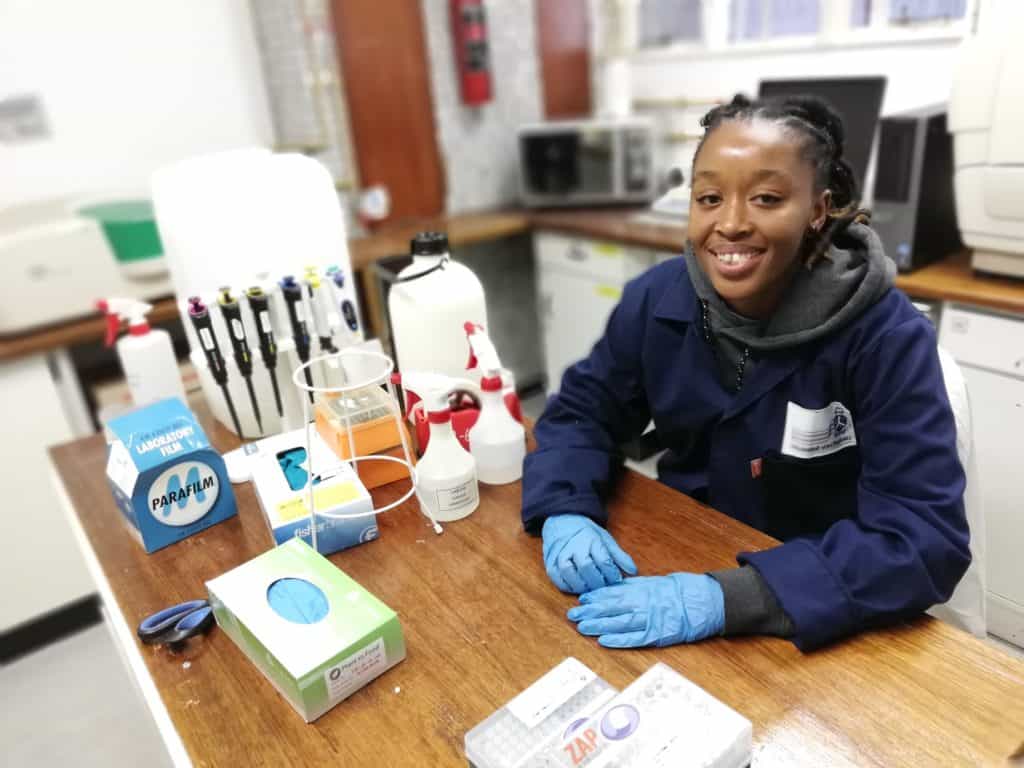 Manana Dlangalala took a roundabout route into food security studies, but it marks a return to her childhood interest in food and cooking.

At UP, however, Dlangalala, 23, has left behind the king of the jungle to turn her attention to a popular ingredient in salads – the cucumber. Looking at the entirety of the cucumber agroecosystem – ie the complete agricultural environment in which cucumbers are grown and harvested – she is trying to detect the genes that trigger the production of enzymes known as Extended Spectrum Beta-Lactamase (ESBL). These ESBL enzymes are produced in certain bacteria, and then confer these bacteria with resistance to a range of antibiotics used in public health.

The most pressing concern is that these ESBL-producing bacteria are potentially able to transmit these triggering genes to bacteria naturally living within the human gut. While it’s known that the antibiotic resistance can’t be passed on to humans but rather to their gut bacteria, it’s still unclear what kinds of risks – if any – this could ultimately pose to humans.

One of the hypothesised sources for contamination of vegetables by ESBL-producing bacteria may be irrigation water, a specific focus of Dlangalala’s study. “Most farmers use water sources that are known to be polluted,” she says. (A small scoping study by the Water Research Commission in 2016 pointed to this, and called for urgent and more detailed research into the quality of irrigation water in South Africa.)

Dlangalala currently receives a scholarship from the national Centre of Excellence in Food Security (CoE-FS). But it’s taken her a roundabout route to get into food security. At school in Vosloorus she had imagined becoming a chef. Later she considered careers in medicine and biomedical engineering, even teaching. She ended up at Stellenbosch, she admits, more by circumstance than design.

But it was her undergraduate interest in food microbiology that drew her, eventually, to UP and the food safety group of Professor Lise Korsten, she says.

Dlangalala may not have become a medical doctor or a biochemical engineer or (for now) a teacher, but she still cooks, she points out. And she doesn’t just keep it basic. “I’m extra,” she says with a laugh.

Listen to Manana speak to Valley FM, about her research

Covid-19 lockdowns across the world have unleashed a range of unintended consequences, sparking a global economic crisis that has magnified…

As South Africa prepares to shut down for 21 days to counter the rapid spread of COVID-19, promises around the…