UWC’s Professor Julian May appointed to the National Planning Commission

The University of the Western Cape’s (UWC) Professor Julian May has been appointed to the South African government’s National Planning Commission (NPC), to provide his ideas, insight and expertise to advance the country’s growth and development. 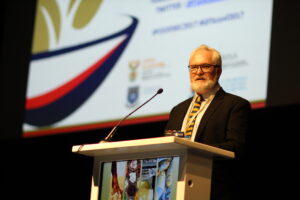 Director of the Centre of Excellence in Food Security, Professor Julian May.

Professor May is the director of the Department of Science and Innovation-National Research Foundation Centre of Excellence in Food Security (DSI-NRF CoE-FS), hosted by UWC and co-hosted by the University of Pretoria, and the United Nations Educational, Scientific and Cultural Organization (UNESCO) Chair in African Food Systems and is the director of the South African-German Centre for Development Research (SA-GER CDR).

NPC commissioners are respected thinkers in South Africa, serving as critical advisors to the national government by “providing recommendations in the interest of the long-term development of the country”. They are, according to the NPC, “the voice of the future representing the long-term aspirations of South Africans”.

May began his term as NPC commissioner on 1 December 2021. He will serve for a period of five years, providing expert advice on matters related to poverty and food security.

Of his appointment to the NPC, May said: “I am delighted to be appointed to the NPC at a time when South Africa needs to find ways to build back better as we address the many challenges that have arisen from COVID-19.

“This gives us an opportunity to revisit many of the assumptions that have informed our National Development Plan, and to focus on addressing the urgent needs of those who are experiencing hardship.”

Professor José Frantz, Deputy Vice-Chancellor: Research and Innovation at the university said: “We are proud of the acknowledgement given to Prof Julian May to serve on the NPC. Being of service is a way of life for Julian and we wish him well as he serves for the next five years.

A focus on poverty and food security

May obtained his PhD from the University of KwaZulu-Natal in 2007, and the topic of his thesis was The Persistence of Poverty in Post-Apartheid South Africa: Assets, Livelihoods and Differentiation in KwaZulu-Natal, 1993–2004. His research concerns the dynamics of poverty; the linkages between poverty, population and programmes for poverty reduction; and food security.

The DSI-NRF CoE-FS director is the principal investigator on ongoing research projects focusing on child malnutrition, food systems in South Africa’s secondary cities and towns, and food and nutrition indicators.

He recently co-edited the South African Child Gauge 2020: Food and Nutrition Security and has edited six other books and journal special editions; written over 40 chapters for various books; and published more than 50 refereed journal articles, the most recent of which is Precision approaches to food insecurity: A spatial analysis of urban hunger and its contextual correlates in an African city.

May has extensive experience in linking research to policy development having led the Poverty and Inequality Report that was prepared for the then President Thabo Mbeki in 1996. He has served three terms on the South African Statistics Council and chaired the Council’s sub-committee on social statistics. He currently serves on the Council of the Academy of Science for South Africa (ASSAf) and chairs the standing Committee on Science for the Reduction of Poverty and Inequality.

He has held numerous other positions including research associate at the Brooks World Poverty Institute at the University of Manchester; research associate in the Department of Social Policy, Oxford University. He was a Visiting Professor at the Centre for International Poverty Studies, University of Bergen; and a visiting researcher at the London School of Hygiene and Tropical Medicine, the Ruhr-Universität Bochum, the Centre d’économie de la Sorbonne (CNRS) at the Université Paris and at the Centre for Environmental Geography, Vrije Universiteit Amsterdam.

This article first appeared on the University of the Western Cape’s website.