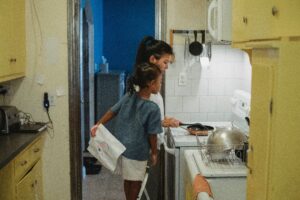 The need to mobilise around the right to food (RTF) was one of the key messages from a webinar focused on whether the COVID-19 pandemic has moved South Africa forward in ensuring RTF for all South Africans. The webinar, which focused on the topic “Food Imbizo: Realising the right to food in South Africa – Has the pandemic moved us forward?”, was co-hosted by the Food Imbizo and the Dullah Omar Institute for Constitutional Law, Governance and Human Rights (DOI).

The Food Imbizo is a collaborative learning network connecting academics, researchers, non-profit and Chapter 9 organisations, and civil society, with its secretariat based in the DSI-NRF Centre of Excellence in Food Security (CoE-FS).

“The right to food is such an important and basic need. We all should have access to adequate food and nutrition. But we need to also expand the definition of what the ‘right to food’ is. It has to include the right to safe and healthy food to address the crisis of under-nutrition and the challenge of obesity, in South Africa,” said Dr Marc Wegerif, a CoE-FS project lead, based at the University of Pretoria, who focuses on maximising access to a balanced, safe and healthy diet for low-income urban residents.

For Dr Wegerif, the RTF can be tackled in two ways — litigation and the mobilisation of citizens. Litigation requires a careful selection of cases to take to court, he said. He cited the work of the Treatment Action Campaign in their bid to secure the right to treatment for people living with HIV/Aids, and how it expanded the right to treatment by starting with a focus on vulnerable groups and their specific human rights.

While the legal arguments can become overly technical, “to mobilise, we must have clear, simple messages — ‘everyone should have a meal, eat every day, fill their stomachs, and have a healthier life’. One of the problems we’ve had in South Africa with the RTF is that we have not had a clear constituency arguing for this.”

During the pandemic, it became clear that there was a need for the state to meet the nutritional needs of South Africans that goes beyond relying only on the food market. Legislation and interventions declared by government during the State of Disaster “showed us government has the powers to do these things if they want to”, said Wegerif.

However, government did not adequately consider RTF. Food parcel distribution came late and was limited. Food prices were allowed to continue to rise above the core inflation rate even as people lost incomes. Despite all the powers contained in disaster legislation, very little was done to ensure food was accessible to those in poverty. This shows the need for a focus on RTF that would ensure food security is always considered in disasters.

Studies have shown that malnutrition in children causes stunted growth and development, which makes malnourished children more likely to get sick; lag behind in brain development, leading to poor academic performance which, in turn, negatively impacts their mental health. In 1994, in response to child hunger, the government established the National School Nutrition Programme, which now feeds about nine million learners at schools.

For Dr Chantell Witten, a previous awardee of the CoE-FS and the current lead on the Infant and Young Child Feeding Advocacy Project at the centre, RTF starts much earlier than providing children with access to food at school; it begins with mothers as the producers of infants’ first food in the form of breastmilk.

In spite of efforts to promote breastfeeding, South Africa is not on track to meet the global target of 50% of infants under the age of six months being exclusively breastfed. Mothers also face an uphill battle with the bombardment of advertising that promotes formula for babies.

Implementing the 2012 Regulations Relating to Foodstuff for Infants and Young Child Feeding (R991), which prohibits the “advertising and promotion of infant formula in any form and on all media platforms”, has helped to some extent. It also governs the production, distribution, packaging, and how the industry engages with mothers and all those who work in the field of infant and young child nutrition.

“For the last 10 years, we as a food and nutrition fraternity, health professionals and the national Department of Health have been collating a body of evidence of violations. Last year, we saw civil society engage with R991 as we have never seen before. That is thanks to HEALA, because [they] took up the case against Nestlé … [who] held stokvels to promote their formula products for children older than three years,” explained Witten.

“Firstly, [civil society] was exposed to a law like R991; secondly, there was a recognition that child nutrition starts with young children; and thirdly, that if we displace breastfeeding and allow industry to run amok as it has, we will have little success in controlling industry in the marketing of other unhealthy foods.”

With all the information that has been gathered on R991 violations, Witten said the next step was to work together as a collective to pursue strategic litigation to tackle unhealthy food environments like “eating an elephant, piece by piece”.

“We have a legal framework, evidence of violations, and we have children dying in South Africa because of severe, acute malnutrition and these are children mostly under the age of two because of the displacement of good feeding practices. With all the evidence we have generated, this issue can be an entry point for the RTF,” said Witten.

Other participants in the seminar included Aisosa Jennifer Omoruyi from the DOI, Marcus Solomon from the Right of Children to Food Campaign, Glory Lueong from Fian International, Commissioner Mluleki Marongo from South African Human Rights Commission, Nzama Mbalati from HEALA, Baone Twala from Section 27, and Charles Simane from the South Africa Food Sovereignty Campaign and COPAC.

The full seminar can be viewed here.