African and French institutions partner up through TSARA, a research plan for food and agricultural systems 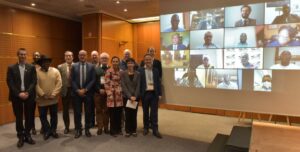 Launch of the TSARA initiative on 3 March 2022 at the Paris International Agricultural Show. Professor Julian May, director of the DSI-NRF Centre of Excellence in Food Security is pictured front, fourth from the right. © INRAE – Bertrand Nicolas.

On the occasion of the Paris International Agricultural Show 2022, the TSARA initiative (Transforming Food and Agricultural Systems through Research in Partnership with Africa) has officially launched. TSARA, initiated by two French research institutes – CIRAD and INRAE – and developed jointly with around 20 African partners (universities and research institutes), aims to strengthen cooperation in order to promote sustainable agriculture, food systems and agricultural, pastoral and forestry landscapes. The overall goal is to improve food security, fight global warming, shore up biodiversity, and support human, animal and ecosystem health, as well as youth employment and gender equality. The initiative has been presented to several international organisations such as the World Bank, the International Fund for Agricultural Development (IFAD) and the Agence Française de Développement (AFD).

Europe and Africa face many substantial challenges in the areas of agriculture, food and the environment in a context of climate change. States from both continents have also committed to the 17 goals of the United Nations 2030 Agenda for Sustainable Development and the goals of the Paris Agreement on climate change. The futures of Europe and Africa are tied to these challenges. Addressing them will also have an effect on other major global challenges, such as transitioning towards truly sustainable food systems. Research and training are essential levers to face these challenges.

INRAE, CIRAD and their African partners wanted to join forces and pool their resources to enhance scientific collaboration between the two continents and deepen the impact of agricultural research to meet these challenges. This initiative is part of efforts to bolster cooperation between European and African countries, efforts which are encouraged by the European Union and the African Union and which were recently reiterated by the French Presidency of the Council of the European Union.

The research programme will be operational from 2022

The TSARA initiative aims to produce a high-quality research and innovation programme, co-constructed by African and French institutions and centred on impact, training and transfer to rural and urban stakeholders and support for public policies. It is based on close coordination among INRAE, CIRAD and a group of African institutions that have participated in various virtual meetings in 2021 and 2022*.

This initiative will draw from existing cooperation mechanisms, such as international laboratories, observatories, networks and partnership platforms, that will be strengthened, as well as increased mobility. One component of TSARA is the creation of a portfolio of research, training and innovation support projects that adhere to a medium- to long-term scientific agenda based on eight priority areas. These areas cover issues relating to soil, water and forests under climate change; the agroecological transition of agriculture and livestock farming; food system sustainability; human, animal and landscape health; and work and employment.

TSARA will help advance important international initiatives such as the European Union-African Union (EU-AU) partnership in research and innovation, the EU-AU plant-based protein initiative, the 4 per 1000 – Soils for food security and climate initiative, PREZODE and the Great Green Wall.

*List of the African institutions involved in setting up this initiative:

Originally published by CIRAD. The French version of this release is available here.