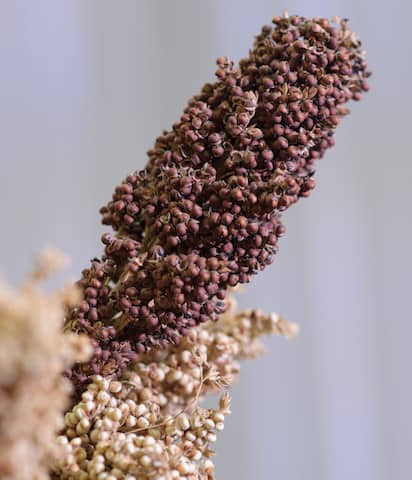 Indigenous grains like sorghum and millets hold the potential to improve South African diets and, at the same time, help develop small businesses. That’s according to Professor Gyebi Duodu of the University of Pretoria’s Department of Food Science, who conducts research on healthy foods made from indigenous grains.

“Rapid urbanisation in Africa has adversely affected people’s dietary choices; we are not eating that healthily any more,” says Duodu, who is part of the Centre of Excellence in Food Security’s programme on Food Processing. “In the interest of convenience, people are eating less of indigenous whole grains and more of highly refined or energy-dense foods, which has brought about an increase in diet-related chronic disease, things like diabetes, cancer and so on.”

Africa boasts a wide variety of indigenous grains and other crops, which if consumed as whole grains could offer a healthier alternative to high-energy, high-glycaemic index (GI) foods made from highly refined wheat and maize. Examples of indigenous grains include sorghum, millets, and teff; other crops that Professor Duodu is interested in include the legumes cowpea and Bambara groundnut, and orange-fleshed sweet potato.

Along with colleagues at Tshwane University of Technology, University of Limpopo and the North West University, Duodu is using these crops to develop various foods such as porridges, biscuits and beverages. After these foods have been developed, he and his colleagues test the foods for their health-promoting properties and other quality parameters. They are also working with the Agricultural Research Council (ARC), who provide the orange-fleshed sweet potato, and the Council for Scientific and Industrial Research (CSIR) who assist with analysis.

“We’ve done a lot of the basic research, and the data indicates that these foods have very good potential health promoting properties – we have a proof-of concept,” he says. The nutritional benefits he is interested in are things like low GI, antioxidant activity, and nutrients like iron, zinc and vitamin A which are commonly deficient in South African populations.

“We are trying to draw people’s attention back to the positive aspects of our indigenous grains.”

Duodu hopes to take the research forward into the next phase – testing the health-promoting effects of these foods in animals and eventually, humans. This type of research is more difficult, more time-consuming and more expensive, but Duodu foresees that it will have major benefits for South Africa, and not just in terms of health.

“With more research, these products could provide opportunities for small businesses looking for an innovative product that is proudly South African,” says Professor Duodu. He hopes that potential entrepreneurs will buy into the concept and foresees that teaching these businesses how to process the grains into different forms will introduce new skills into the sector and even generate employment opportunities.

Another sector that could benefit is the small-scale crop producers that are already producing sorghum and other crops in South Africa, both independently and for larger food manufacturing companies. Duodu sees this “as an opportunity to boost production of these grains – if we can show they are health-promoting, it seeps back to farmers and boosts production of those crops.”

Thus, through his research into food processing for better health, Professor Duodu hopes to not only improve the health of many marginalised South Africans, but stimulate the economy across the agro-food value chain.