Faith and food should be brought closer together 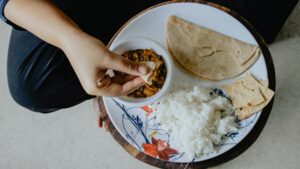 At its first meeting of 2022, the newly renamed Food Imbizo (formerly the Community of Practice), an initiative of the DSI-NRF Centre of Excellence in Food Security (CoE-FS), provided an overview of the role that faith-based organisations (FBOs) do and can play to address food insecurity in South Africa and beyond.

But as panellists and guests hinted, more can be done.

Inspired by their faith, individuals and FBOs alike literally stepped up to the plate during the various levels of the COVID-19 lockdown.

As household incomes shrunk and cupboards emptied, the faithful – along with many others – either set up new community kitchens or upscaled existing efforts. Despite reduced financial support, many continue these herculean labours, often at their own expense.

“One of the most important things that one associates with faith-based organisations and individuals of faith, is that their acts are based on core principles such as that of compassion.”

So explained Robert Kriger, writer and theologian, in opening the 2 March meeting of the Food Imbizo which is associated with the CoE-FS, hosted at the University of the Western Cape (UWC) and co-hosted by the University of Pretoria (UP).

The topic of the meeting was pointed: What is the role of faith communities in food governance?

As Kriger elaborated, the challenge is to harness that compassion towards making a lasting difference.

There is growing acknowledgement that the current efforts of both individuals and FBOs are unsustainable; that, much like Sisyphus of lore, every day they are pushing the same boulder up the same steep hill – the hill, in this case, being a broken food system. Many understand that to make a difference at scale, FBOs, especially, will have to help force change on the food system itself.

Traditionally, this is not a battleground that FBOs have entered.

“Faith and food are two f-words that some people say can’t be further apart,” said Professor Ernst Conradie, senior professor in the Department of Religion and Theology at UWC.

But there is every reason for FBOs to play a role in the larger food fray, especially around the governance of the food system, argued Professor Conradie. For one thing, they have, for better or worse, considerable influence.

“Their influence comes from the remarkable sense of … participation, with millions of South Africans attending services on a weekly basis – in considerable numbers.”

“Religious leaders are, according to all opinion polls, far more trusted than political leaders, than sports leaders, or whatever other sector of society.”

That point was echoed at the meeting by Francesca de Gasparis, executive director of the multi-faith Southern African Faith Communities’ Environment Institute (SAFCEI), an organisation that works at the intersection of food and climate justice.

Of particular concern to SAFCEI is the large shadow that the agro-industrial food complex casts over both arenas. Despite the sometimes-disputed claim that smallholder farmers produce 78-80% of the food in the world, it is ‘Big Food’ that calls the shots in food systems, controlling the production, distribution and retailing of food – often at the expense of the environment and the poor.

If FBOs are going to play a more vocal role in the food system, they must capitalise on the energy they showed during the lockdowns, suggested Zukile Ngqeza, a lecturer in the Faculty of Theology at North-West University.

Shaun Cairns, the founder of Seed 2 Harvest, insisted that people and organisations are compelled to do so by their faiths; that they have the obligation to answer one important question: “What kind of world will our kids inherit from us?”

Cassiem Khan, executive director of the Imam Haron Foundation, argued that FBOs must become more outspoken about the larger troubles in the food system.

“Faith leaders and people of faith must become more belligerent, and advocate more on the subject of hunger,” Khan said. “And call out political leaders for their inaction, and for their lack of interest.”

The question now is how to turn faith into action. Or, many faiths into one action.

“This is not an easy issue,” said Kriger. “Despite the fact that probably about 96% of people in South Africa profess one religion or the other, there are great and deep divisions. But we are committed to finding a road map towards mobilising faith communities to play a stronger, more coherent role in food governance.”

From the outset, the Western Cape Food Governance-Community of Practice (FG-CoP) was an ambitious exercise in ‘knowledge co-production’. The aim…

SA needs a place-based approach to restarting the economy