One in four children in South Africa remain stunted, despite a comprehensive social grant system

One in four children in South Africa remain stunted, despite a comprehensive social grant system, according to research by the UK-South Africa Bilateral Research Chair in Social Protection for Food Security at the University of the Western Cape, Prof.  Stephen Devereux.

“The social protection for food security research agenda is motivated by the fact that food insecurity in South Africa remains extremely high. Child stunting has not fallen below 25% since the early 1990s,” Prof. Devereux said during a UK-SA Newton Fund partnership symposium held at the National Research Foundation on 2 October 2019.

This was the case, Prof. Devereux said, despite the fact that food production exceeds consumption needs, and despite the existence of a comprehensive system of child support grants that has reached 12 million children since its introduction in 1994.

The chair forms part of the UK-SA Research Chairs Programme, which was launched two years ago to expand the South African Research Chairs Initiative (SARChI) through collaborative partnership. 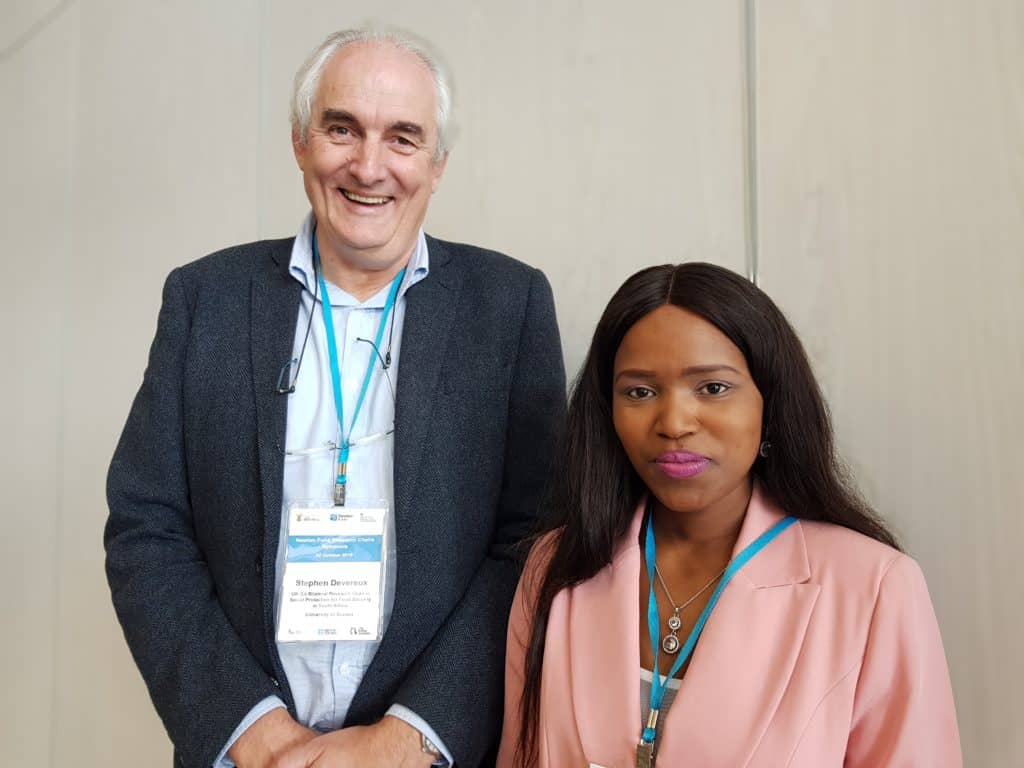 Under the supervision of Prof Devereux (left), Zona Ndondo’s (right), master’s degree focused on a comparative analysis of alternative food security indicators relating to farmworkers in the Northern Cape.

Sponsored through the National Research Foundation, the British Council and the British Academy, the programme is aimed at improving the extent, delivery and impact of research capacity and providing mentorship opportunities for emerging researchers at South African universities.

One of the beneficiaries of the programme, Zona Ndondo, was supervised by Prof. Devereux and obtained her master’s degree in development studies, focusing on a comparative analysis of alternative food security indicators relating to farmworkers in the Northern Cape.

The Department of Science and Innovation (DSI) has lauded the partnership as beneficial to South Africa, particularly in the areas of human capital development and innovation.

“The UK-SA Newton Fund partnership has been a pillar of our cooperation and has produced impressive outcomes in most areas,” Mr Khaya Sishuba, Director for Bilateral Relations (Europe and Gulf States) at the DSI, told the symposium. “Focusing on people, translation and research strands, we have now witnessed one of the most successful collaborations in our bilateral country portfolio, lifting our relations to an all-time high.”

The UK-South Africa Newton Fund is part of the broader Newton Fund programme, which has a total UK government investment of £735 million up until 2021, with matched resources from partner countries. The UK-SA Newton Fund has already seen a co-investment of £30 million since its launch in 2014.

This is a shortened version of the article originally published by theDepartment of Science and Innovation. Read the full articleHERE

“The laws do not protect farm workers,” said Carmen Louw of Women on Farms Protect ‘We were thrown out like…

Emily Tjale of the Land Access Movement of South Africa Those questions touched all the hot-button issues, from continued exploitation…