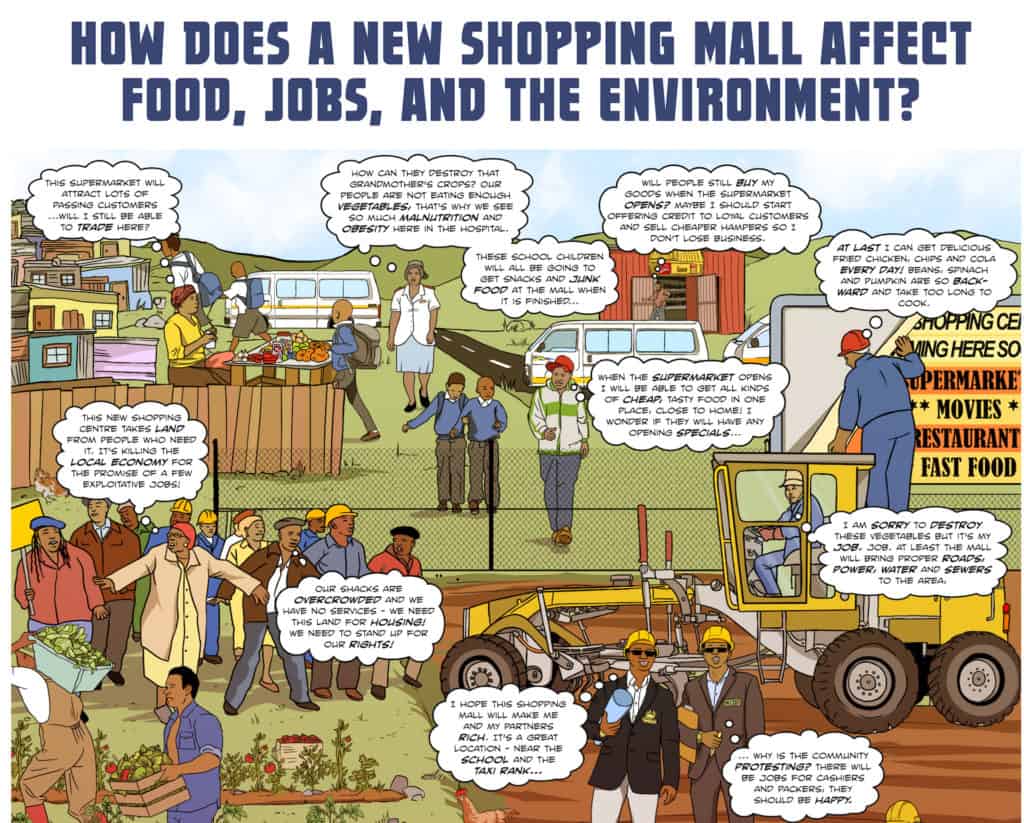 To address a lack of awareness and stimulate deliberations supporting more democratic urban food planning and governance, PLAAS and researchers in the CoE-FS’s Food Governance and Policy Reform theme  developed a series of information briefs on key issues and concerns in local food governance.

Can pictures and images be used to solicit thoughtful and reflective discussion about one’s position in the food system?   The Centre for Excellence in Food Security (CoEFS) and PLAAS worked together in 2018 to build a platform for a Community of Practice on food sensitive planning, and have been trying out some interesting ideas.

Food systems research  has highlighted the important role of  food environments in shaping consumption and livelihoods — and thus health and poverty. Food environments are rapidly changing as a result of wider societal transitions.  The agricultural  job market is contracting,  large numbers of people are leaving the rural areas, food value chains are consolidating and narrowing, and the power of ‘Big Food’ (powerful processing corporations and retail chains) is increasing. South African food environments are characterised by a tension between highly-concentrated and mechanised formal food processing and retail on the one hand, and a diverse informal food retail economy.

Local government can make a difference. It shapes food environments through various planning, health and environmental regulations. But these are embedded across multiple institutional silos guided by divergent rationalities, which means that the impact of  local government is often felt in  incoherent and contradictory ways.  The interests of property developers, financiers, and large retail chains are often privileged over those of the poor and marginalised. The impact on food and livelihoods is generally ignored. There is very little awareness among local government officials and planners about the implications of their decisions on various stakeholder groups. Moreover, academic publications on food environments and food systems change are often overly complex, abstract and therefore inaccessible to non-academic audiences. This limits their ability to influence governance discourse or participatory planning processes.

In order to address this lack of awareness and stimulate deliberations supporting more democratic urban food planning and governance, PLAAS and researchers in the CoE-FS’s Food Governance and Policy Reform theme  undertook to develop a series of information briefs on key issues and concerns in local food governance. Drawing on a detailed literature review of key dynamics shaping urban food environments, they identified a group of particularly relevant themes:  1) Retail development, urban agriculture and housing; 2) Transport infrastructure and informality; 3) Food processing, health and livelihoods. But the key intent was not to provide direction or guidance on democratic food planning. Neither was it  to simply present facts or a wish-list of recommendations. Rather, to facilitate knowledge co-generation on the topic, they developed a series of visually-accessible media that could convey the complex interplay of interests and power converging on key food settings which exemplify the core themes and could additionally serve to stimulate debate in participatory learning processes.

The settings were identified to reflect governance themes prominent in current discourse, leading to three key generic scenarios where different stakeholders contest their interests in particular spaces. Each poster reflects one such setting, and shows the many different stakeholders who inhabit or transition through these settings.

The stakeholders are represented with speech-bubbles, which were filled with snippets of text representing concerns considered plausible based on literature review and stakeholder consultation. Additionally, a set of “blank” posters was designed to elicit debate as to what concerns these stakeholders might voice. A first iteration of the posters was presented and discussed at 4 workshops with various stakeholders including food systems researchers, SALGA representatives, provincial government officials and officials from the local municipalities of Cape Town, Johannesburg, Tshwane, and Witzenberg, as well as with representatives of informal trade. During these workshops, various different methodologies were explored to utilise the posters, and the voices of stakeholders in the posters were reviewed for plausibility.

In all workshops, the “blank” posters provoked lively dialogue between participants, during which they developed a deeper understanding of the complex issues and trade-offs portrayed. The posters incorporating stakeholders’ imputed voices were validated by participants, who felt that the concerns and perspectives represented indeed reflected plausible positions which had been encountered similarly in concrete situations. However, the most impactful use of the posters seemed to be linked to using the “blanks” as a touchstone to inform generative dialogue guided by a set of questions which emerged from consultation with researchers, media designers and scenario planning experts:

The posters have been finalised and are ready to be deployed through a targeted set of processes with a broader range of stakeholders including civil society representatives, design professionals, and state officials. Further dissemination is planned through a broad social media campaign linked to the DST-NRF Centre of Excellence in Food Security, which funded the development of these media.

Florian Kroll is a PhD student at PLAAS.

This article was originally published by PLAAS.

South African corporates ignore exploitative business practices to get their products onto spaza shelves. Shutterstock In the last decade, the…

The scale and complexity of food insecurity demands the integration of technical knowledge with local knowledge In South Africa, ‘stakeholders’…