It won’t be without its challenges, but soybean could well be the answer to Africa’s agricultural and food security woes. 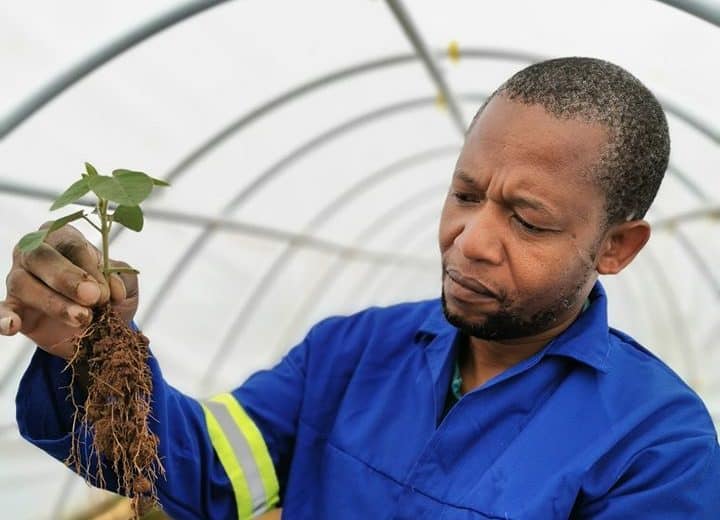 Soybean belongs to a family of plants known as legumes, which can naturally enrich soil with nitrogen and thus reduce the need for nitrogen synthetic fertiliser.

Today, some 87% of global soybean production is converted into animal feed and soy oil, while the rest is consumed by humans as a protein source and used for other industrial applications. That offers major opportunities for both farmers and the food-insecure in Africa, say the writers of Modelling Predicts that Soybean is Poised to Dominate Crop Production Across Africa, published in Plant, Cell & Environment.

But there will be substantial hurdles to clear. Smallholder farmers, who produce 70% of food in Africa, are constrained by their lack of resources and new technologies. Economic returns on their crops are poor. They constantly face a trade-off between growing subsistence crops and crops for cash. They very rarely manage to achieve the legume yields they theoretically should. Training and finance are hard to come by. In addition, many are beset by issues of soil quality, water availability, market access and land tenure, among other troubles.

“Within that context, it’s not surprising then that the African yield gap – the difference between the maximum achievable crop yield and what’s actually achieved – and the poverty cycles continue,” says Professor Ndiko Ludidi, Acting Director of the DSI-NRF Centre of Excellence in Food Security (CoE-FS), one of the authors of the paper. Ludidi is based at the Department of Biotechnology at the University of the Western Cape.

But it’s here that legumes come into their own, note the authors. For one, they are acclaimed for their symbiotic nitrogen fixation properties. Symbiotic nitrogen fixation refers to the process in which nitrogen-fixing bacteria, sitting in the roots of plants, are able to catch ‘free’ nitrogen in the atmosphere and convert it into ammonia, which contains ‘fixed’ nitrogen. The plant is then able to utilise the ammonia as a fertiliser for its own growth and development.

For farmers struggling with poor soil health, legumes are a godsend. In addition to, in a manner of speaking, producing their own fertiliser, symbiotic nitrogen fixation also helps to make other vital nutrients such as phosphate more accessible for the plant. What’s more, some grain legumes are hardy types, tolerant to high levels of stress and able to grow under difficult climatic conditions.

Notwithstanding those virtues, there are concerns that grain legumes like soybeans are losing their status as a protein source for humans. As incomes grow or more people migrate to the continent’s urban centres looking for greener economic pastures, meat is becoming the protein source of choice.

In the process, many legumes – up to now an important source of protein – have become neglected or ‘orphan’ crops elsewhere in the world

A slowdown in soybean production could bode poorly for those struggling to put food on the table, he adds. “Legumes such as soybean can still be a valuable protein source for the rural poor.”

Fortunately, there are signs that, thanks in large part to successes in development of soybean varieties able to grow under testing conditions, a soybean revolution could be on the horizon in Africa. Research suggests that soybeans are increasingly being grown as a major cash crop and animal feed, in both cases alleviating food insecurity  since the crop provides much needed income.

But if “Africa has the potential to be a world leader in the production of soybean as well as other key grain legumes,” as the authors insist, some work will be required. Farmers on the continent are yet to achieve the yield potential of soybean.

“To realise the full potential of soybean production in Africa, researchers, farmers, policy makers and traders will need to join forces,” says Ludidi. “We know that countries like Zambia, Zimbabwe and South Africa can capitalise on these opportunities, but there’s yet untapped potential in Central and West Africa as well.”

Professor Ludidi is will deliver a presentation during the upcoming International Symposium on Soybean Development for Sustainable Agriculture in Africa. The event takes place at the University of the Western Cape from 31 March to 1 April 2020.

No need to sacrifice taste for less fat in mayonnaise – Phd...

You don’t have to sacrifice taste for less fat in your favourite mayonnaise, and Dr Joyce Agyei-Amponsah has proven it…

Good gut health could be a key line of defence against viral...

Although there is no specific research that shows the positive effects of high-fibre foods in helping to fight against COVID-19,…

WESTERN CAPE CENTRES OF EXCELLENCE TO FACILITATE ENGAGEMENT WITH SCHOOLS

Scientists must be encouraged to take work from their labs to the community and to schools. So said Professor Jose…