With funding from the Centre of Excellence in Food Security, Thabang Msimango is one of the young women conducting cutting-edge research into food safety.

Like many young black people her age, Thabang Msimango is the first in her family to go to university.

Inspired by her mother, an early childhood development (ECD) practitioner who had slowly earned her formal credentials, Thabang had initially imagined becoming a doctor. She wasn’t too heartbroken when that didn’t pan out, however. As early as the first year of her studies at the University of Pretoria (UP), she had found her true calling. “I quickly grew to love the biological sciences, especially the genetics parts – I realised that you could do and become so many things with biotechnology,” she says. 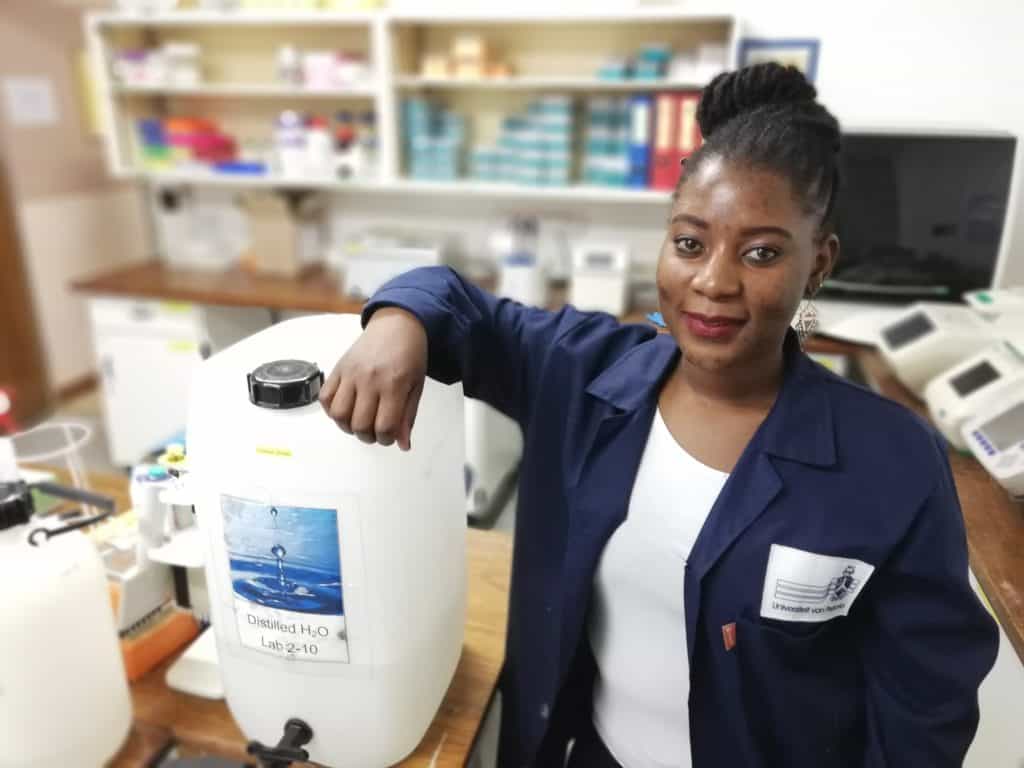 Thabang Msimango has found her calling in the food safety research labs at the University of Pretoria.

Now a master’s student with the food safety group – led by Professor Lise Korsten in UP’s Department of Plant and Soil Sciences – Thabang is looking at the prevalence and characteristics of foodborne pathogens in food served to learners in the National School Nutrition Programme (NSNP), which provides meals to over 9.2 million learners in South Africa. But occasional media reports about suspected food poisoning have raised concerns about food safety practices in the production, distribution and preparation of those meals.

Thabang is working with samples of fresh produce – including spinach, carrots, tomatoes and apples – collected from a dozen NSNP schools in Gauteng and Mpumalanga. Early findings suggest that the levels of certain foodborne bacteria in fresh produce consumed at the schools regularly exceed the limits prescribed by the Department of Health’s microbiological quality guidelines.

Predictably, Thabang’s research has coloured the way she now relates to food.

Indicator organisms refer to the suite of organisms whose detection suggest that pathogens may also be present.

Not put off, though, she’s determined to move onto the next step, a PhD. “What intrigues me now, especially here in South Africa, are the laws and policies behind food safety, and I would want to incorporate that into my doctoral studies,” she says.

To take her mind off indicator organisms, Thabang occupies herself with of a couple of pastimes. She braids her hair. She’s getting into the running thing, but is worried that she’ll get addicted and end up running Comrades. And she has a longstanding love for literature by black writers – recent reads include Redi Tlhabi’s Khwezi: The Remarkable Story of Fezekile Ntsukela Kuzwayo (about the young women for whose alleged rape former president Jacob Zuma had been charged but acquitted) and No Longer Whispering to Power, the biography of former national public protector Thuli Madonsela.

Photo: Maria Lindsey Content Creator / Pexels. In this article by Tru-Cape, the DSI-NRF Centre of Excellence in Food Security…