In her master’s thesis, graduate Camilla Thorogood argues that informal early childhood development centres are more plentiful than official numbers would suggest, and that because of the promise they hold for childhood nutrition and development, more should be done to integrate and support them. 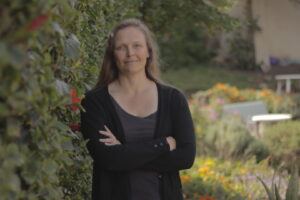 Camilla Thorogood insists that despite their limitations and registration status, informal ECDs play a critical role in the feeding of children.

In September 2021, Camilla Thorogood graduated from the University of the Western Cape (UWC) with an MPhil in Land and Agrarian Studies from the Institute for Poverty, Land and Agrarian Studies (PLAAS). In her master’s thesis, Thorogood, who received support through the DSI-NRF Centre of Excellence in Food Security (CoE‑FS), argued that informal early childhood development (ECD) centres are more plentiful than official numbers suggest and that because of the promise they hold for childhood nutrition and development, more should be done to integrate and support them.

One of the participants in Thorogood’s study, 50‑something Anathi (not her real name), runs an ECD from her shack on the Sweet Home Farm informal settlement in Philippi, Cape Town. It hardly makes for the picture‑perfect ECD centre that most would have in mind.

The centre’s 15 or so children, ranging from two‑month‑old infants to more active five‑year‑olds, are largely confined to a carpeted room in the shack. There is no educational equipment or furniture. The bathroom is the nearby communal flush toilets. Anathi herself has no formal training or qualifications. But here, she nonetheless labours day in, day out to keep the children safe, warm and clean and — as much as the fees of between R150 and R400 per month allow — fed.

In categorising ECDs for purposes of her thesis, titled Food Provision Challenges Facing Early Childhood Development Centres in Two Cape Town Townships, Thorogood identifies Anathi’s ECD as ‘disconnected’, meaning that beyond the fees that parents pay, it has little or no external support.

The ECD is not eligible for the state’s ECD child subsidy, nor receives any aid from any of the many non‑governmental organisations that offer varied support to centres in communities like Sweet Home Farm.

This means that Anathi, and other ECDs like hers, have to take care of and feed the children in their care with the limited means on hand, regardless of whether parents pay in full or on time, or not. But ECDs manage to get food to the children, often providing multiple meals over the day (some provided by the parents), even if these are not always the most “nutritionally dense”, says Thorogood.

It’s unlikely that Anathi would be able to register as an ECD with the Department of Social Development (DSD) anytime soon, or at all, explains Thorogood in her thesis. The ECD owner has neither the capacity nor networks to do so, a process that would, first of all, require her to find the funding to set up a potentially compliant structure, which in her case would be a container or prefab.

“The irony is that the children in Anathi’s ECD are the very children the DSD per‑child subsidy is intended for,” Thorogood writes. “But within the current policy structure, where full registration is required to apply for this subsidy, Anathi will remain reliant on low fees to provide food and cover costs in her ECD, with limited opportunity to change this, ensuring she continues as a deeply informal ECD.”

It’s a catch‑22 that Thorogood repeatedly encountered in her study across two sites: the informal Sweet Home Farm, and the semi‑formal Vrygrond township abutting the middle‑class suburb of Marina da Gama and just a few short kilometres from the beaches of Muizenberg.

Building on the ground‑laying work of her then‑employer, the Sustainable Livelihoods Foundation, and speaking to key informants (from NGOs to local shebeen owners), Thorogood identified and mapped out 42 ECDs: 35 in Vrygrond and seven in Sweet Home Farm.

Of the 38 covered in her study, the overwhelming majority (31) were unregistered. In a typology she developed specifically for her study, Thorogood also categorised the 38 ECDs by levels of ‘connectedness’ to external support from government or NGOs. In this way, she could define ECDs by those who are:

All but one of the disconnected ECDs were in Sweet Home Farm. Only one of the 38 ECDs benefitted from the DSD subsidy.

Based on these findings, Thorogood argues that it’s likely that there are many more unregistered, informal ECDs than the 40–50% estimated in other studies.

What’s more, says Thorogood, unregistered ECDs in especially informal communities are not just woefully undercounted, but also underappreciated. These “survivalist” ECDs serve both as important livelihood opportunities for the women business owners and the women they employ, and also meet an important need for childcare.

“These types of ‘mushroom ECDs’ will always pop up and grow. And if they didn’t exist, you can imagine the social problems where parents would either leave kids at home [or] locked inside, and we’ve seen with shack fires what [can] happen. Or parents would lose their jobs. We do not appreciate the value offering of these centres.”

The COVID‑19‑associated lockdowns also highlighted the role that ECDs, and the ECD subsidies, can play in child nutrition, says Thorogood.

“Government realised that in shutting down ECDs, they were cutting off a chief food supply for children and families.”

Registration of an ECD comes with invaluable benefits, including potential access to the DSD. Thorogood argues for a revisit of registration criteria and policy implementation that, she says, is “appreciative rather than punitive”. In informal communities, the requirement for land use and zoning certificates proves to be an all but insurmountable hurdle.

Thorogood believes a more tiered approach to registration would be more helpful, taking into consideration the context within which ECDs operate.

“They should be relevant to the spaces in which the kids live,” she says.

“Even with the environment and the limitations in which they were operating, many of these informal ECDs look and operate as much as [a formal ECD could]. The only difference is that they didn’t have that piece of paper.”