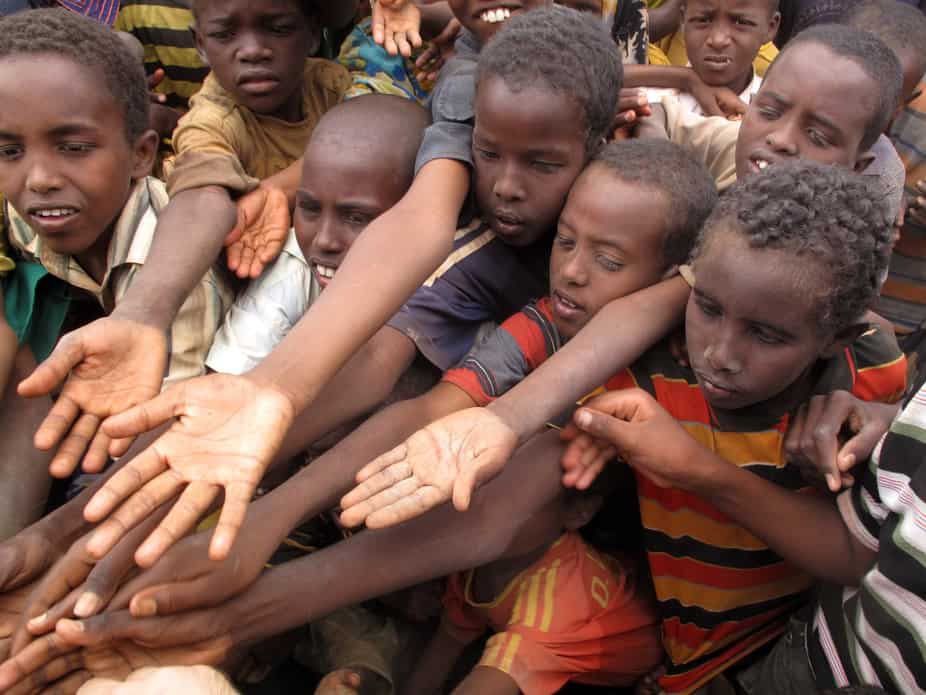 Hungry children stretch out their hands at a Somalian refugee camp in 2011. Sadik Gulec/Shutterstock

What are the humanities?

Loosely speaking, they are academic disciplines that study how people process and document the human experience through history, philosophy, literature and cultural studies.

In South Africa, a more elastic net for describing the humanities has been used. It includes the social sciences – sociology, anthropology, political studies and the like.

For many, this stubborn question remains unanswered notwithstanding the publication, three years ago, of two local reports on why the humanities matter. The first was issues by the Academy of Science of South Africa (ASSAf). Controversially, it argued the humanities in South Africa were in “crisis”.

The second, initiated by South Africa’s minister of higher education, Blade Nzimande, also made recommendations – the most controversial of which was the establishment of a government-supported National Institute for the Humanities and Social Sciences.

At the recent International Symposium on Food Studies, held at the University of Pretoria, the full power of the humanities was on display. It is a real pity so few were there to see them in action.

Organised by the DST-NRF Centre for Excellence in Food Security, which is jointly hosted by the universities of Pretoria and the Western Cape, the gathering hosted 43 participants from the US, France, the UK, Senegal and South Africa.

If the intellectual fare was first-rate, imaginative choreography helped to make this a truly memorable conference. In one session, the conference heard a riveting theoretically rich talk on food (and its preparation) in late-modernity as the speaker was preparing – in the style of TV celebrity chef Nigella Lawson – flatbread and gazpacho!

And, over dinner, participants were exposed to the secrets of the traditional South African dessert, Malva Pudding. Where did the name come from? And what is the authentic recipe for this great South African favourite?

Turns out there are three plausible answers to the first question, while two recipes lay claim to authenticity – both of these were on hand to taste.

The academic presentations were drawn from a mix of disciplines – not all in the humanities. But the texture of each presentation lifted the conversation towards a shared grammar, which encouraged thinking way beyond narrow categories that invariably police disciplinary silos.

There is an invaluable intellectual lesson here for interdisciplinary work in the humanities: a single topic – if it is well-chosen – can encourage disciplinary categories to overlap. But to succeed, they must have an everyday familiarity, like food, that shares a sufficient common language in which all disciplines can engage.

The Pretoria event showed something more besides such generalities: talking about food is a productive way to understand a complex world.

Food is the very stuff of life. And, at its core, is human sociability. Around this, myth and legend abound – although there was very little of this sentimentality in the stuffy seminar room.

Instead, the kitchen was called a place of “harrowing intimacies”; that the term “Cape Malay” – as in “Cape Malay food” – was a way to hide the fact that this country had experienced 176 years of slavery; and that cookbooks, for all their celebratory – not to mention scrumptious – tones, were a way of organising time.

So it was that the sharper edges of the humanities – critique, deconstruction, political economy – opened orthodox “food studies” to searching questions.

Why has the force of public management discourse erased the word “hunger” from its lexicon, replacing it with the less emotionally charged term, “food security”?

What are we to do with a world in which starvation is often the destiny of the poor, and obesity the plight of the rich? Can we reframe all politics through the idea of “food justice” which – almost everywhere – is shot through with questions around race?

Tough questions, these – questions that only the humanities are licensed to ask it seems. And finding answers to them – and the many others that were tabled – requires imagination that lies beyond the regular intellectual junk food of neoliberal thought.

But food – how we speak of it, how we prepare it, how we eat it – is deeply entwined both in ourselves and in our respective cultures. It is also personal, epistemological and political.

This does not mean that food is not a place for cultural mixing; it certainly is – probably, it is the most successful site. But the dinner table is almost a place where the shame of poverty is most acutely experienced. It is where the vulgarity of opulence is at its most shameful.

Against the backdrop of this horror, an accusing finger was wagged at the so-called “tasting menu” or menu dégustation. These are trendy menus that offer small portions of several dishes as an often very expensive meal. The rich of Johannesburg (and other wealthy cities) spend thousands to sample exotic cuisine, only to leave the best restaurants still hungry.

Did the agronomic and economic view of food and its study yield some of their traditional hold to the humanities during the two days in Pretoria? It is much too early to say. But thanks to the humanities, a deeper conversation on a universal passion may have only just begun.

Peter Vale, Professor of Humanities and the Director of the Johannesburg Institute for Advanced Study (JIAS), University of Johannesburg. This article was originally published on The Conversation. Read the original article.